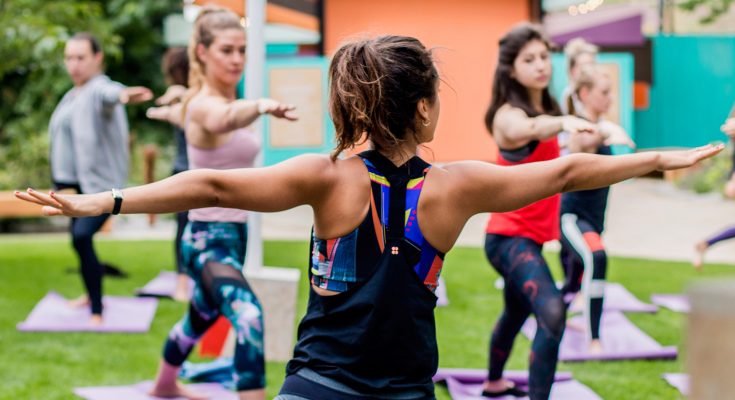 A series of ‘Pipnic’ pop-ups has been taking place at high footfall locations across the UK capital during July to promote nut butter brand, Pip & Nut.

The dedicated ‘Pipnic’ sampling spaces will showcase and serve up a range of nut butter and nut milk breakfast, lunch and snack ideas, plus they will play host to a series of yoga and exercise classes run by leading fitness studio Frame.

Pip & Nut has partnered with experiential specialists, Sense, to create the activations and execute the summer-themed campaign, which brings to life both the nut butter occasion and the playful nature of the lifestyle brand. It represents Pip & Nut’s biggest sampling exercise to date, with 50,000 samples to be handed out across the six-day campaign.

Running throughout the day, the Pipnic Pop-Up will target commuters and office works during the week and hit high footfall parks and events at the weekend. Highlighting the versatility of nut butters, granola pots with almond milk and a drizzle of almond butter will be served at breakfast, along with a selection of open sandwich tasters from lunchtime onwards with toppings, including almond butter with avocado and chilli and coconut almond butter with mixed berries. In addition, the brand’s nut butter squeeze packs, a perfectly portioned on-the-go snack, will be handed out, with roaming carts also heading to nearby tube station and high footfall areas.

Pip Murray, Pip & Nut founder, says: “Pipnics really captures the fun, playful nature of the Pip & Nut brand both in terms of the menu, activities on offer and also the design of the space, which includes lots of brand notes with a picnic chillout area and a bright coloured bar. As well as building brand awareness and encouraging trial, we wanted to use the campaign as an opportunity to educate on usage occasions and create a Pip & Nut ‘moment’, a time in the day to both enjoy a nut butter treat and take some time to pause.”

Sense Senior Account Manager Joanna Wharton adds: “We’re very excited to be working with such an innovative brand during a key growth period. Our brand ambassadors will be taking Pip & Nut’s great sense of fun and its message about the importance of a healthy lifestyle to Londoners over the summer months.”

Samples are provided without charge.  Frame classes are £5 for a 25 minute session.

The Pipnic campaign follows a period of significant growth for the Pip & Nut brand and the recent addition of four new nut butter variants to its range. The brand is on-track to hit a retail sales value in excess of £9m in 2017, an increase of over 100% year on year, as consumers embrace its innovative range of healthier, all-natural products.

Sense specialises in helping brands do exciting things in the real world to create authentic communications across the marketing spectrum. It manages campaigns from strategy to evaluation.

Founded by entrepreneur, Pippa Murray, now 28, Pip & Nut launched to the market in January 2015 and has been shaking up the nut butter category ever since.  Now two and a half years old, Pip & Nut can now be found in over 3000 stores around the UK and Ireland, including Sainsbury’s, Holland & Barrett, Boots, Selfridges, Fortnum & Mason and Whole Foods, and is the fastest growing nut butter brand in the country.