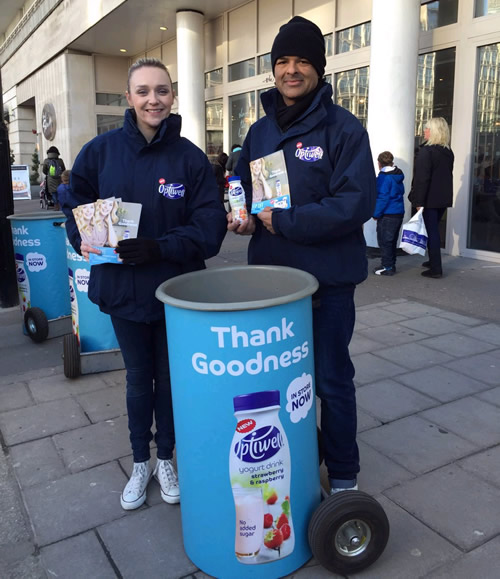 The activity involves the takeover of multiple poster sites across the station, combined with experiential sampling run by integrated agency Sense, along with digital support through online brand display and social media.

Will Jones, Marketing Director at FrieslandCampina, says: “The Waterloo domination was chosen for Optiwell, our new delicious fat-free yogurt drink, due to the large reach and frequency of coverage it offers. With multiple poster sites in close proximity at the station, it allows for strong brand visibility and impact, which is essential when launching a new brand,” said

Jones adds that the brand will be targeting the commuter with unmissable brand information on exiting the station, plus a free sample for them to try at their leisure in the form of an on-the-go bottle for consumption when they would otherwise feel like a snack.

Optiwell is being positioned as a healthy alternative to help people resist tempting snacks, with the slogan: ‘With Optiwell, resisting temptation has never tasted so good’”

The Waterloo digital and sampling campaign will run from February 16th to 20th 2016, targeting 25 to 45-year-old women.

FrieslandCampina is one of the world’s largest dairy co-operatives. With a commitment to producing nourishing dairy products, its new yogurt drink Optiwell is full of dairy goodness including calcium and protein, but with no added sugar, no fat, and is only 64 calories per 200ml.

It launched Optiwell in the UK in August 2015, recruiting This Morning presenter Holly Willoughby to be brand ambassador for the launch as part of a four-year marketing campaign valued at £25m.