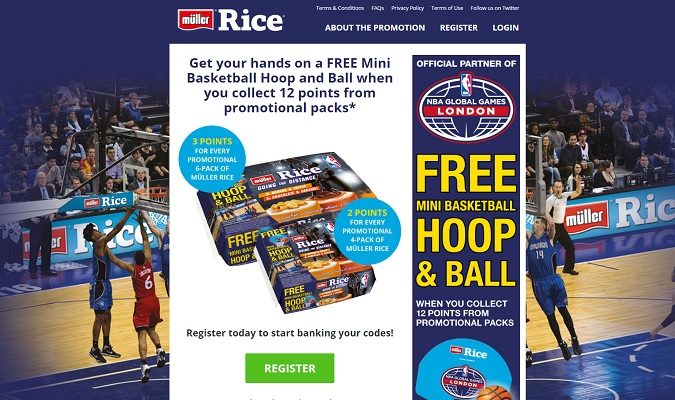 Müller Rice has announced an extended partnership with the US National Basketball Association (NBA) that sees the brand become an official marketing partner of the upcoming NBA Global Games London 2017. The dairy company will be running an on-pack promotion and a separate multimedia promotion as part of the deal.

Taking place at The O2 on January 12th 2017, the Denver Nuggets will take on the Indiana Pacers in the NBA’s seventh regular-season game in London.

Tasty B, the rapping bear which is Muller Rice’s brand character, will be at The O2 on the evening engaging with fans, alongside Müller Rice branded courtside signage and concourse sampling.

As an official marketing partner of NBA Global Games London 2017, an on-pack promotion on millions of packs of Müller Rice allows consumers to redeem codes to claim their own NBA-branded mini hoop and basketball. In addition, through a multimedia campaign, one consumer will have the opportunity to win a pair of tickets to be there on the night.

An on-pack promotion will allow consumers to redeem codes to claim their own NBA-branded mini hoop and basketball, while there will also be a prize draw offering one consumer a pair of tickets to be there on the night via a multimedia promotion.

The promotion opened at the start of October and runs until February 24th 2017. Each promotional pack contains a Unique Code; codes from four packs are worth two points and codes from six packs are worth three points. Codes can only be used once. Consumers go online to www.mullerrice.com to save their points; once they have amassed 12 points, they can redeem them for a free mini basketball hoop and ball.

Müller Chief Marketing Officer Michael Inpong says: “Our relationship with The NBA goes from strength to strength and we are delighted to be partners once again at The NBA Global Games London 2017. We believe a long term partnership with sport will help us, to empower consumers to make active and healthy lifestyle choices.”

Marc Armstrong, NBA EMEA Vice President, Global Marketing Partnerships, adds: “The NBA is pleased to announce our expanded partnership with Müller Rice as we prepare for our seventh regular-season game in London. We look forward to engaging fans in the UK and Ireland through the new Müller Rice promotional packs and other exciting marketing activities.”