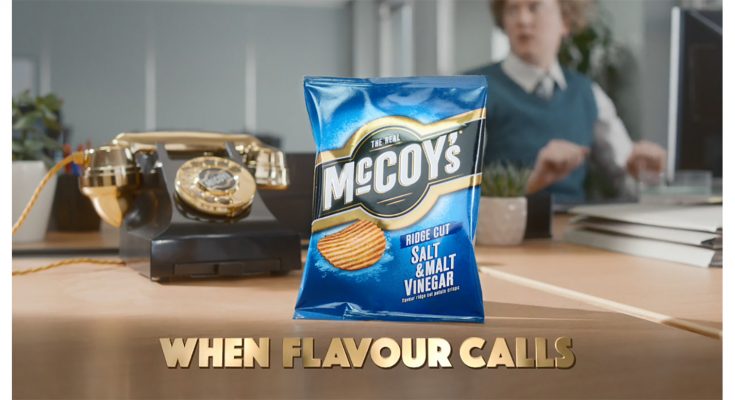 Snack brand McCoy’s has relaunched its ‘Win Gold’ campaign for 2018, offering a prize of £10,000 to shoppers who find one of five gold crisps hidden in packets of McCoy’s.

The Dig for Gold on-pack promotion runs alongside a £1.5m television campaign that will see the ‘When Flavour Calls’ creative return to TV screens. In the TV ad, which is also being used on social media sites, KP brand spokesman, everyman hero Thomas, gets a call from Flavour on his golden telephone receiver (a reference to McCoy’s over-arching ‘When Flavour Calls’ brand campaign) and starts searching his packet of Salt & Malt Vinegar McCoy’s to see if he has won.

On finding a Golden Crisp, his grey office is transformed with a mound of gold, while his colleagues work on.

The promotion runs until midnight on May 31st 2018, across McCoy’s multipacks in both Classic and Mighty Meat flavours and McCoy’s Grab Bags. To enter, consumers must be 18 or over and residents of the UK (England, Scotland, Wales and Northern Ireland), Isle of Man and Channel Islands. There is a No Purchase necessary route for Northern Irish consumers.

Win Gold is also being supported with shopper investment across Tesco stores and Convenience and Impulse outlets.

Jeff Swan, Marketing Director at KP Snacks, says: “We are excited to see Win Gold back for 2018! With McCoy’s experiencing phenomenal growth in 2017 and the brand now worth £120m, we are pleased to be repeating such a popular promotion to help retailers drive sales.”

KP Snacks is part of the Intersnack Group, Europe’s leading producer of savoury snacks, operating in around 30 European countries.