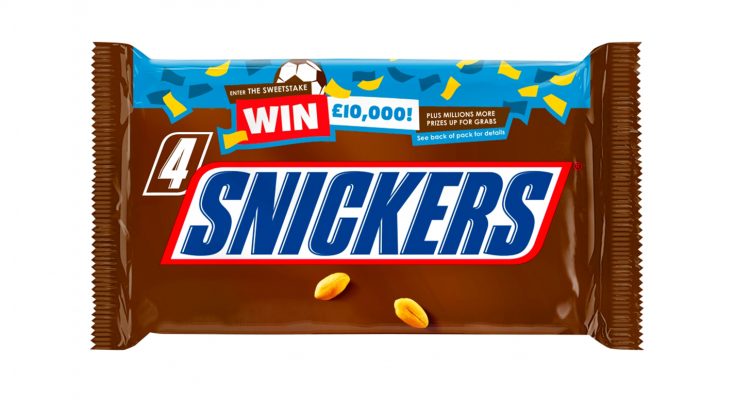 Mars Wrigley Confectionery UK is launching The Sweetstake, a new football-themed on-pack promotion offering consumers the chance to win millions of prizes including free products and cash instantly, plus entry into a final draw for £10,000.

An adaption of the classic football fan tradition of “sweepstakes”, the unique promotion will run across 11 brands in singles, multipack and pouch packs. There will be 100 million promotional packs in the market from the 23rd of April in the lead up to and during the football this summer.

Mars Wrigley is not an official sponsor of the FIFA World Cup, taking place in Russia this summer, which is why there are no overt references to the tournament, just generic football references; but the confectionery giant is obviously hoping to benefit from increased consumption of its products by fans watching the matches on TV. Mars Wrigley suggests that 80% of UK football fans will watch the games at home.

Promotional packs will all carry a visible flash, with a WIN beacon consistent across all of them. On top of this, the Mars brand is the official chocolate partner of the Men’s England Football Team, and Point Of Sale displays will be available featuring three famous players to capitalise on the nations support: Dele Ali, Marcus Rashford and Jamie Vardy.

The promotion will also be supported by digital and live Out Of Home (OOH) media.

Walland adds: “As a partner of the England Football Assocation, and as supporters of the England football team, the Mars bar has football in its DNA and Mars Wrigley Confectionery produces the perfect products to stock up on ahead of a big tournament.”