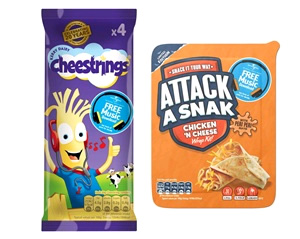 Kerry Foods is offering consumers a free download from a wide selection of songs from Universal Music with promotional packs of Attack A Snak or Cheestrings.

The new on-pack promotion launches in the UK and Ireland soon and will run until late September. The free download is worth 99p and shoppers can choose which track they want from the selection on offer.

The same promotion is running across a number of other European countries, including Belgium, the Netherlands, Germany, Austria, Poland, Spain and Italy.

Kerry says music downloads are growing by +6.9% globally, observing that downloading tracks has become very popular, with many people preferring to download than to buy it as a CD.

Tom Willcock, Kids’ Dairy Marketing Manager at Kerry Foods, says: “The UK cheese market is worth a staggering £2.3bn, but the kids’ dairy snacking sector is yet to reach its full potential. We are keen to continue to drive this growth.”