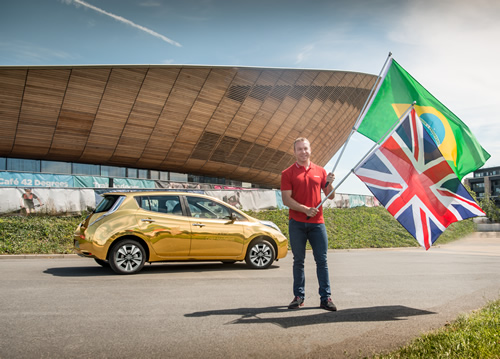 Nissan will give away special gold-wrapped all-electric Nissan LEAF cars to its athlete ambassadors who win gold at the Rio 2016 Olympic and Paralympic Games.

The giveaway was unveiled at the Lee Valley Velopark in Stratford by Britain’s most successful Olympian and Nissan ambassador, Sir Chris Hoy, who introduced the first gold Nissan LEAF.

“It’s always exciting and nostalgic to come back to the Velopark, after winning my fifth and sixth gold medals here,” said Sir Chris. “For all of the Nissan athletes going to Rio, the 2016 Games will be a moment in their careers that they will never forget, whether they win a medal or not. But let’s hope they can do it – compete at their best and come home with gold. It would be fantastic to hand over one of these special gold Nissan LEAFs on their return.”

Chris Marsh, Nissan Motor GB Marketing Director added: “Giving our gold medal-winning Nissan athletes a gold Nissan LEAF is our way of celebrating their incredible successes. Nissan is fully behind all of the GB athletes heading to Rio but will of course be keeping a close eye out for those we have individually supported over the course of the Games’ cycle on their road to Rio 2016.”

Nissan athletes who win Gold in Rio will receive their golden LEAF on their return from Brazil. Nissan stresses that there will only be one car per athlete, no matter how many Gold medals they win.

One of the gold wrapped Nissan LEAFs will be on display at Nissan’s Innovation Station at The O2 in London from 26th July throughout the whole Games period.

Nissan is the Official Automotive Partner to Team GB and ParalympicsGB. The Gold LEAF is one of a number of other Nissan Rio related activities in the build-up to the Games, including Nissan’s Ultimate Sports Day, the Nissan Olympic fleet announcement and the Usain Bolt vs Fire campaign.