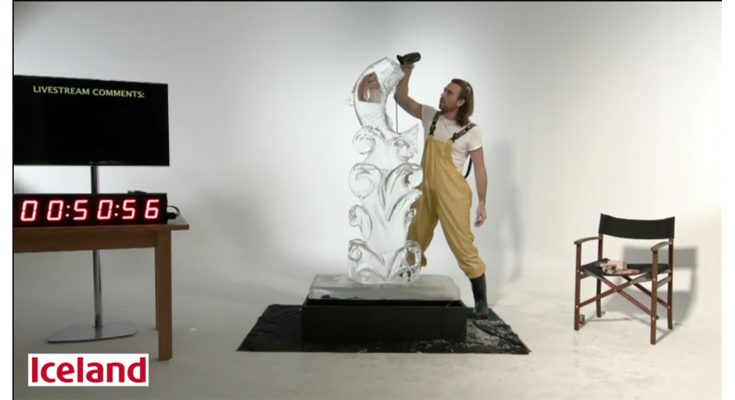 UK frozen food store Iceland is launching an interactive Facebook Live campaign devised by independent media agency the7stars and social distribution company Jungle Creations to highlight the money that can be saved if you go frozen.

The social media campaign has been created to highlight the UK’s food waste problem, with the average family wasting £700 worth of fresh food every year.

An ice statue containing £700 worth of notes will be broadcast live via Viral Thread, Food Envy and Twisted Facebook sites on January 18. The competition asks viewers to guess how long it will take the sculpture to melt for a chance to win the hidden money.

The competition is more complex than simply guessing how long ice takes to melt, however. As fish is the number one food that benefits from being sold as frozen, an on-screen host, dressed as a fisherman, will be directed by the public in real-time. Whether it’s using a hairdryer to speed up the melting, taking a coffee break or doing fifty press ups to slow it down, directions from viewers will be projected onto the wall behind the host, adding an interactive element to the campaign.

Andy Thompson, Social Manager at Iceland, says: “We’re really excited about getting the public involved in our new campaign. Our continued #PowerofFrozen activity has always been about re-educating customers to the value and quality of frozen food, and by involving them in the campaign we hope to reach existing customers as well as new consumers who don’t currently shop frozen.”

Isobel Mooney, Digital Account Lead at the7stars, said: “We wanted to use an entertaining set up to show the general public that by using frozen food over fresh it’s not only better for the environment but also for your budgets. The campaign drives a positive message through championing interactive advertising at its best.”