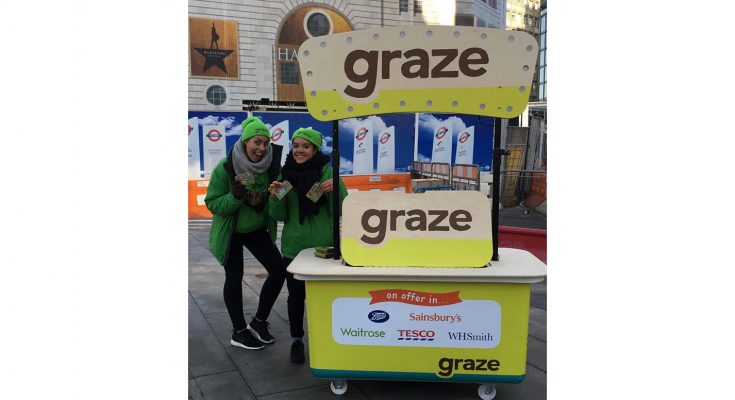 Healthy food brand Graze is giving out one million samples to raise awareness about its on-the-go snack food range, available at retailers.

Brand ambassadors will be handing out packs of Graze’s Veggie Protein Power – which it says is one of its bestselling retail varieties and includes spicy chickpeas, edamame beans and black pepper cashews – outside busy central London mainline rail stations until February 3rd 2017.

Graze has timed the campaign to coincide with the increased interest in healthy eating in January.

The sampling campaign is being handled for Graze by experiential agency Hotcow. Sally Durcan, Managing Director of Hotcow, says: “We know from previous research that brand recognition can increase by over 40% with commuters taking the product to work and having it on their desk. We also know that reminding people of the brand taste has a significant impact in keeping existing consumers buying the brand and new ones moving in to try the brand.”

Graze launched in the UK in 2008. It began by offering an online subscription service where people could sign up for regular deliveries of its healthy food boxes, which can be bought in over 200 combinations. It launched a range of snack products in retailers in July 2015, initially with an exclusive rollout via 850 Sainsbury’s stores. Graze snacks are now available in 7,000 stores across the UK including Sainsbury’s, Tesco, Asda and Boots.

Graze has also expanded into the US market, both via its online subscription model and through a partnership with US pharmacy chain Walgreens, part of the group which ultimately owns Boots in the UK.