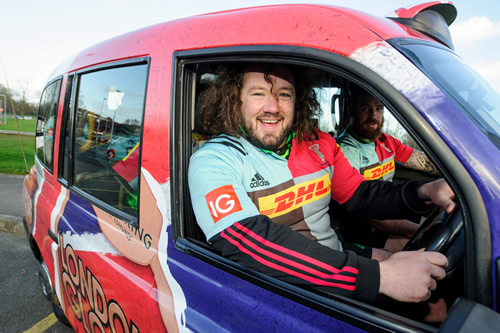 UK brewer Greene King has just launched a year-long experiential and social campaign to celebrate the new look and taste of its capital-inspired ale, London Glory, by engaging the city’s inhabitants through the launch of its interactive What’s The Story campaign.

To drive awareness for the ale, a stand-out branded taxi with a ‘writer in residence’ in the driving seat was positioned across key high footfall locations in London including Queen Street, Spitalfields Market and The Stoop, Twickenham, in the three days up to and including the Harlequins versus Northampton Saints match at The Stoop on February 6th 2016.

Londoners were invited into the taxi to tell stories about their home city over a free pint of London Glory, giving participants the chance to enjoy 15 minutes of fame when their tale was broadcast to the Greene King brewery’s social audiences through a dedicated social media campaign.

Chris Houlton, managing director of Greene King brewing and brands, said: ‘’The London Glory experiential activation was designed to really engage the people at the heart of the brand and celebrate the wonderful diversity of our capital city. The wider Greene King partnership with Harlequins offered a natural opportunity for us to engage with a new and responsive audience, particularly via social media.”

The #WhatstheStory campaign continues over the coming weeks with captured content shared and amplified across Greene King’s social channels, including dedicated stories from Harlequins rugby players, in addition to a series of consumer incentive prizes, including once-in-a-lifetime opportunities to share pints with Harlequins players, hosted via leading consumer media.

The branded taxi will return for a range of further experiential activities.

The campaign will drive momentum across the year as it continues to celebrate and amplify the very best and most glorious elements of the UK’s capital city.

Greene King, the pub retailer and brewer, was founded in 1799 and is headquartered in Bury St. Edmunds, Suffolk. It employs over 40,000 people following the recent acquisition of Spirit Pub Company. It operates around 3,100 pubs, restaurants and hotels across England, Wales and Scotland. Its leading retail brands include Hungry Horse, Old English Inns, Chef & Brewer and Flaming Grill.