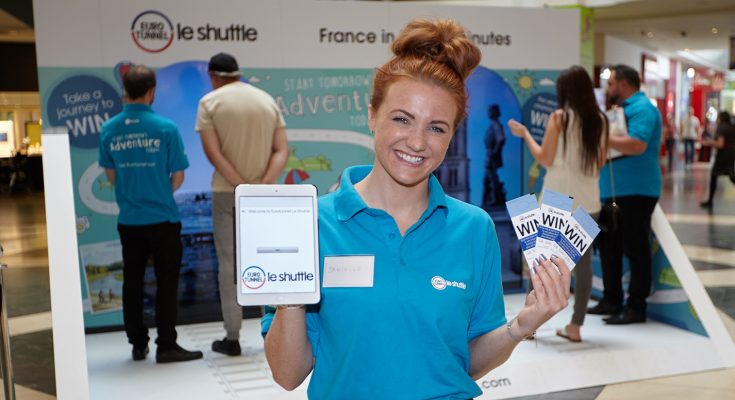 Eurotunnel Le Shuttle has just run a two-week experiential campaign at Bluewater and Lakeside shopping centres to promote the benefits of travelling to Europe by car via the Channel Tunnel.

The campaign, which was produced and delivered by experiential agency Ambient in partnership with OMD and Talon, took place at the beginning of June and looked to target a younger market of car owners through an engaging digital journey, while highlighting key Eurotunnel Le Shuttle benefits such as the short journey time, the wide choice of available destinations and the freedom to explore Europe at your own pace.

The activation stand featured two large tunnels with built-in screens. As consumers approached the tunnel entrance, they were prompted to scan their unique Eurotunnel Le Shuttle ticket before being sent on a ‘mystery’ digital journey to one of four holiday destinations.

At the end of the journey, consumers discovered if they had won one of a selection of exciting prizes including complimentary Eurotunnel Le Shuttle tickets along with entry to the Nausicaá Sea Centre. Winners were selected at random and revealed following the completion of their digital journey.

Running concurrently with the Out Of Home Experience was a partnership with the Evening Standard, which saw advertorials featuring a number of northern European destinations and filmed short trips with four holidays to be won. Leaflets were handed out to shoppers at Bluewater and Lakeside inviting them to enter the Evening Standard holiday competitions for further chances to win with Eurotunnel Le Shuttle.

Haico VanDerSteen, Marketing and Sales Director at Eurotunnel Le Shuttle, said: “We are very excited to launch the “Mystery Tunnel” experiential campaign and to be able to provide consumers with a fantastic opportunity to explore the many benefits of travelling with Eurotunnel Le Shuttle.”

Catherine Knight, Innovations Project Director at Talon, added: “This was the first OOH Experience activity that Eurotunnel Le Shuttle have ever run with Talon and OMD, and one which we are confident that people in the South East of England loved participating in. The campaign not only showcased some of the best destinations reachable via Eurotunnel Le Shuttle but offered loads of great prizes. The addition of the cross promotion with the Evening Standard added a new dimension to the experience and opened it up to a much wider audience.”