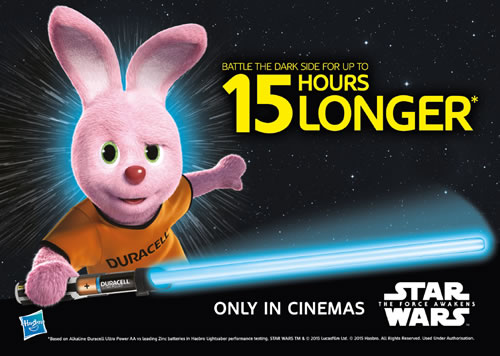 Duracell and Lucasfilm have announced a new partnership and creative campaign ahead of the highly anticipated release of Star Wars: The Force Awakens, featuring limited edition packs with Blippar functionality to access additional content.
Consumers can use the Blippar app on their mobile phones to access film trailers, a ‘Making of the TV Commercial’ video and digitally ‘collect’ the various Star wars characters featured on the packaging.
The collaboration includes TV advertising, digital and social media support, as well as in-store activity and the limited edition Star Wars packs. In addition, the brand has been selected as the battery of choice for the newly issued Hasbro lightsabre.
Available now until February 2016, the limited edition packs feature Star Wars images including the newest member of the Dark Side, Kylo Ren, and new droid BB-8, as well as Stormtroopers, C-3PO and R2-D2 and the Millennium Falcon,
To support the initiative, a new TV ad features the iconic Duracell Bunny battling the dark side. The TV commercial was directed by Wilfred Brimo and featured martial arts choreographer Jan Loukota, who has worked on films including Kingsman and Skyfall.
Javier Hernandez, Western Europe marketing director for Duracell at P&G, says: “Since 1973, the Duracell Bunny has been at the heart of the brand, demonstrating its long lasting performance. Duracell batteries power many devices across the globe and we’re thrilled to be joining forces with Lucasfilm and Hasbro to bring avid fans a limited collection of Star Wars battery packs and lightsabres.”