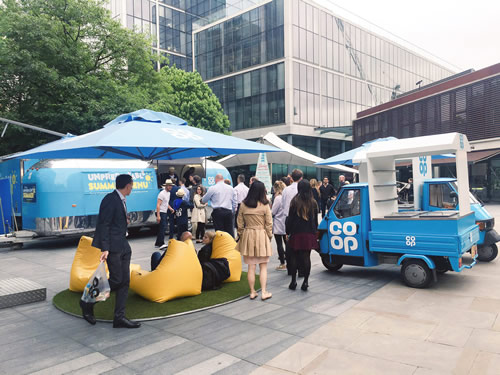 Co-op is running a campaign embracing the unpredictability of the British summer and helping customers do the same. The retailer is asking Facebook fans to help co-create new dishes by suggesting their ‘secret ingredients’. A selection of these unique meals will then be shared across dozens of city centres, events and festivals, with sampling to over a million people.

Experiential agency iD is helping Co-op deliver its Unpredictable Summer Menu to the UK’s major city centres, festivals and cultural events. Dishes will be served from a branded Co-op Airstream, and there will be roving Piaggio scooters packed with On-the-Go samples.

As commuters head home, Brand Ambassadors will be there to greet them with recipe boxes containing all the ingredients necessary to help keep dinner unpredictable, too.

Co-op’s summer campaign will also be raising money for the British Red Cross by encouraging consumers who enjoyed their taster to ‘pay it forward’ by donating £1.

All money raised will contribute to an innovative partnership between Co-op and British Red Cross, launched in October 2015, to highlight and tackle loneliness and social isolation in communities across the UK.

Loneliness is an issue which Co-op members have chosen as being relevant to their communities, with one in seven customers and members stating that they regularly feel lonely, and one in three saying that they know someone in their family and community who is lonely.

Jemima Bird, Customer Director at Co-op, said: “There’s no denying that the Great British Summer is unpredictable and this campaign works to encourage the nation to try something new and allow their dinner to be unpredictable too. The pay it forward donation really shows our commitment to our chosen charity and allows consumers to give something back to their community”

Mike Adamson, British Red Cross Chief Executive, added: “From the independent living services we deliver at British Red Cross, we know that loneliness is an increasing but under-recognised crisis that is affecting people across the UK, shortening lives and eroding health and wellbeing.  Thanks to the Co-op’s amazing fundraising efforts, we will be able to provide vital care and support to help thousands more isolated and lonely people reconnect with their communities.”