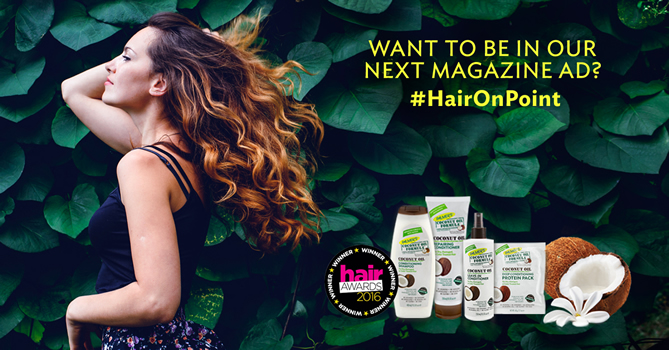 Toiletries and cosmetics brand Palmer’s is marking the relaunch of its award-winning Coconut Oil Formula Hair Care range with an integrated digital and press campaign which offers fans the chance to star as a model in its next magazine advert.

#HairOnPoint lets customers upload personal #HairOnPoint photos or videos and captions to the www.haironpoint.co.uk competition hub for the chance to win one of three makeover and photoshoot packages. The chosen models will appear in the November/December edition of Superdrug’s Dare Magazine.

The promotion runs until September 17th. The Grand Prize Winners will take part in a professional photoshoot, with hair and make-up styling, and feature in a Palmer’s Coconut Oil Formula Hair Care advert in the November/December issue of Dare magazine. They will also receive Love2shop vouchers worth £100 and a Palmer’s Hair Care Pamper Pack worth £50.

In addition to the three Grand Prizes, there will also be 50 weekly prizes of a Palmer’s Coconut Oil Formula Deep Conditioning Protein Pack.

The campaign was created for Palmer’s by brand entertainment agency Media Bounty, which will also shoot and film the makeovers. The campaign, which runs initially for four weeks, includes press and digital advertising.

Palmer’s Coconut Oil Formula Hair Care has been relaunched with a new look and a new formula including Tahitian Monoï (scented oil made by soaking the petals of Tahitian Gardenias in coconut oil) as well as ethically and sustainably-sourced Coconut Oil.

The Palmer’s brand is owned by US company E.T. Browne Drug Company, which also owns a range of skin care products including Palmer’s Cocoa Butter Formula.