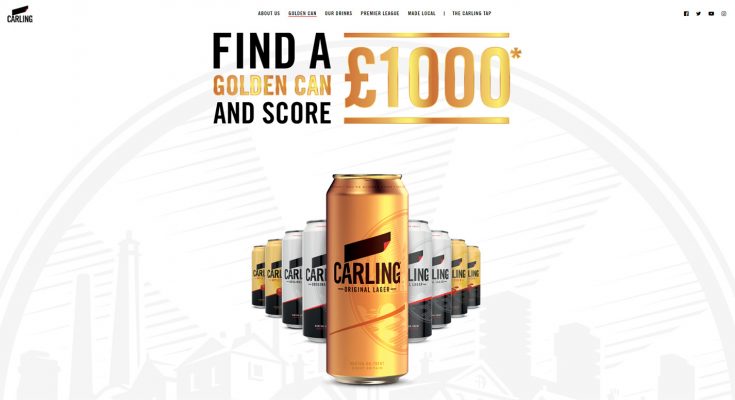 Jun 07, 2018, 15:28 pmComments Off on Carling launches golden can promotion to celebrate summer football

Carling has launched an on-pack promotion offering consumers the chance to win £1,000 cash if they find a limited-edition golden can in a pack of Carling Lager or Carling Apple Cider in participating retailers.

The activation, which will run in most major UK supermarkets and across the convenience channel, comes a week ahead of the start of the FIFA World Cup. Carling is not an official sponsor, but like many other companies is launching a generic football-themed promotion which has been very carefully designed not to infringe on FIFA rights or those of official FIFA partners.

One hundred golden cans have been placed in random packs of two products. Winning packs have been allocated to the participating retailer, with Tesco getting 40, ASDA 20, Morrisons 14, and the rest being distributed among Best One, Budgens, Costcutter, Go Local, Londis, Nisa, Premier and SPAR.

The promotion will run throughout the summer until stocks last, supported by POS tools and on Carling’s social media channels.

Carling brand director Miranda Osborne says: “There is a huge summer of football to look forward to and we are building on that excitement by supporting key off-trade partners with this promotion.”

Consumers who find a promotional golden can flashed with “THIS CAN IS A WINNER – YOU’VE SCORED £1,000” and a 10-digit unique reference number underneath the foil lid of the can can claim their £1,000 prize. They need to keep their Golden Can and their receipt for validation.

The promotion closes on December 31st 2018, or when all prizes have been claimed, whichever is the sooner. Golden cans will be released into the off-trade throughout the lifetime of the promotion, with all 100 in store by the end of August.