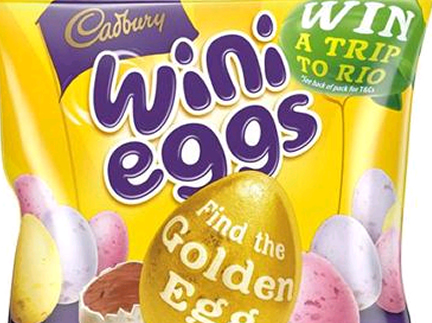 Mondelez is partnering ParalympicsGB with an instant-win promotion on its Cadbury Mini Eggs offering 10 five night family trips to Rio.

Consumers who buy a special 90g promotional pack of ‘Cadbury Wini Eggs’ and find a foil egg and a coupon inside will instantly win the trip to Rio.

By buying Wini Eggs, consumers will also be supporting the Supercharge ParalympicsGB campaign, with 2p from every pack being donated to the British Paralympic Association (BPA).

The BPA, a registered charity, has historically received some public fundraising support but the ‘Supercharge ParalympicsGB’ campaign will go further with a major drive to fundraise money to help take ParalympicsGB to Rio and beyond, claimed Mondelez.

The limited edition packs will be supported by strong in-store activation, as well as digital and PR, to help drive penetration in the bitesize category during summer months, according to Mondelez.

Declan Duggan, brand manager for Cadbury Bitesize, said: “In this Paralympic year we are delighted to be partnering with the British Paralympic Association and giving our support to ParalympicsGB while giving consumers something they constantly call for – a chance to eat their much-loved Cadbury Mini Eggs outside of its traditional season. Due to the product’s popularity in the Easter season, we believe that the launch of Wini Eggs will provide retailers with a great opportunity to drive incremental chocolate bag sales during the summer of sport with an attractive £1 offer.”