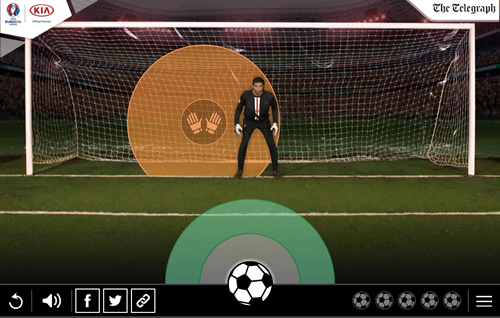 Telegraph links with Kia for Euro 2016

Euro 2016 sponsor Kia and The Telegraph have linked up for a consumer-facing campaign designed to create buzz in the build-up to and then throughout the tournament, driving association between Kia and football, as well as showcasing the All New Kia Sportage.

The campaign is made up of four distinct elements. To kick off, four events are planned across the country at Kia dealerships – in Bolton, London, Bridgend Wales and Burton – phased around key milestones such as the England warm-up matches and squad announcements. The first event took place in Burton on 17 May.

Content captured at the dealerships will be published on the Telegraph website and social channels. Guests attending the preview events will be offered the chance to win tickets to the opening match of Euro 2016. To further showcase the All New Kia Sportage, football talent will be asked for their tournament predictions, players and teams to look out for from the passenger seat of the vehicle.

The second phase of the campaign, taking place as the tournament gets underway, will follow Telegraph sports writer Thom Gibbs on a road trip to France in a Kia Sportage. Thom will be capturing the build-up, game results and fan reactions in a 36 day video series called ‘Thom Voyage!’ hosted on the Telegraph website and shared channels.

To further drive interaction with the campaign, the Telegraph has created a bespoke Kia penalty shoot-out game offering a chance to win an All New Kia Sportage. The game, which launched mid-May and which runs until July 10th, is fronted by ex-England Goalkeeper David James. It is being promoted across Telegraph platforms at tgr.ph/penaltyshootout

To close the campaign, there will be a series of ‘WoW’ features, showcasing incredible moments from the competition in the light-hearted, tongue- in-cheek tone of voice that Kia is known for. These will run alongside high impact, tactical display activity at key moments throughout the tournament, celebrating, commiserating and congratulating teams on their performance.

The deal was put together by Havas Media UK.

Simon Hetherington, Commercial Director at Kia, said: “Kia has a strong link with football. Euro 2016 this summer will ensure that as a brand we will gain cut-through with new consumers and current Kia owners. The partnership with The Telegraph offers sports fans some great once-in-a-lifetime opportunities and allows consumers to experience the Kia brand in an interesting and engaging way.”

Keith Perry, Group Sport Managing Editor at Telegraph Media Group, said: “We’re delighted to have worked with Kia and Havas around this key sporting event, and look forward to helping keep the KIA Sportage top of mind with football fans throughout the tournament.”