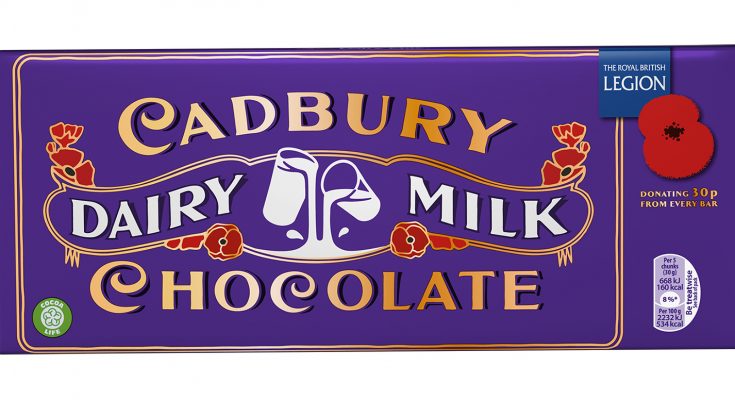 Cadbury is marking the centenary of the end of the First World War, which takes place on November 11th 2018, by releasing a limited edition Cadbury Dairy Milk Remembrance Bar, in partnership with the Royal British Legion.

The confectionery brand will be donating 30p from every bar sold to the Legion, to help its work with the British Armed Forces, veterans and their families. In addition to this financial contribution, Cadbury is supporting the Legion through a year-round calendar of fundraising events and activities.

The 360g bar bears an almost identical wrapper design as Cadbury Dairy Milk bars sold during First World War, but with the addition of poppies, which became a symbol of Remembrance after the war’s end.

Cadbury is also supporting the Legion’s Thank You movement. The campaign aims to thank all who served, sacrificed and changed our world during the First World War. Cadbury will be sharing remarkable stories of the First World War generation who shaped the world we live in today – including those of the Cadbury workforce who supported the war effort on the battlefield and the home front. This included the ‘Cadbury Angels’, women who took up roles within the business during war time and sent almost 30,000 care packages to men serving on the frontline.

While more than 2,000 Cadbury employees joined the armed forces, many others provided critical care for injured soldiers through the Friends Ambulance Unit, established by Laurence Cadbury. Many of the wounded were brought back to Bournville where Cadbury properties were converted to hospitals.

Beth Cameron, Brand Manager, Cadbury, says: “Through our Remembrance Bar and partnership with the Royal British Legion, we are saying ‘Thank You’ to all who served, sacrificed, and changed our world during the First World War. The remarkable stories of the Cadbury workforce 100 years ago have shaped the business we are today and are particularly important for us to remember at the centenary of the end of WWI.”

Catherine Davies, Head of Remembrance at the Royal British Legion, comments: “It is right and fitting that Cadbury is a Thank You partner given its proud history dating back to the First World War.  Cadbury made a great contribution to the First World War by sending morale-boosting gift packages to soldiers on the front line and converting Cadbury buildings to hospitals for the injured back home.  We are grateful to Cadbury for continuing its long standing support for our Armed Forces community and donating to the Legion through the sale of this special chocolate bar.”

The Cadbury brand is owned by Mondelēz International, the global snacking company with 2016 net revenues of approximately $26 billion. Mondelēz is a world leader in biscuits, chocolate, gum, candy and powdered beverages, with power brands including Oreo and belVita biscuits; Cadbury Dairy Milk and Milka chocolate; and Trident gum.