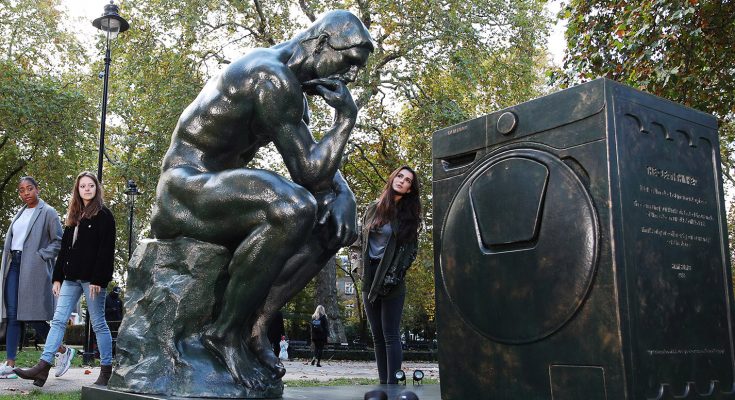 Samsung is showcasing its high-tech washing machine, the QuickDrive, in a new campaign targeting men, after research found that 75% of men are suffering from ‘FODA’, a male condition involving Fear Of Domestic Appliances, and 63% admit to being completely stumped when trying to work out washing machine settings and laundry care symbols.

PR agency Taylor Herring created the new versions of the sculptures, which will be featured across Out Of Home, press, digital, mobile and social media. The creative, which was produced by St Mark’s Studios and directed by Taylor Herring, will be showcased at launch via a full screen take-over at Piccadilly Circus in central London.

The actual statues – “Domestic David” and “The Clean Thinker” – are being installed at high-footfall locations around the capital, including King’s Cross, Russell Square and Battersea Park, as part of the campaign.

Ruth Storey, Head of Marketing for Home Appliances, Samsung Electronics UK & Ireland, says: “We have updated these classic sculptures in a playful bid to remind the public that our home appliances are masterpieces of modern design. Our Home Appliance products are tested thousands of times and come with at least a 5-year warranty, underpinning our confidence in delivering products that – like the iconic statues – are built to last.”

Samsung research found that three quarters (75%) of men admitted to being clueless when it comes to using domestic appliances compared to just 39% of women, and over half of the men surveyed (51%) admitted to having put off a household task because they found the domestic appliance too confusing to use. Apparently, the washing machine instils the most fear in men, with 63% admitting to being completely stumped when trying to work out washing machine settings and laundry care symbols. In fact, when faced with the task of deciphering fabric care label symbols – such as ‘Do Not Tumble Dry’ and ‘Delicate Wet Clean’ – men scored worse than women on 9 out of 10 questions.