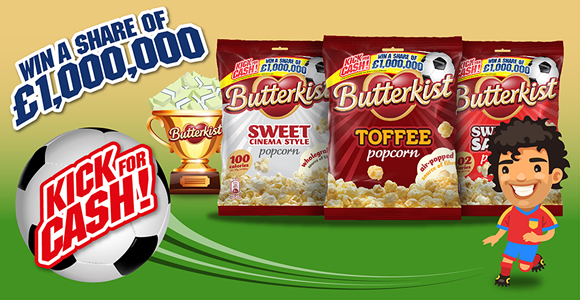 Butterkist popcorn is launching a new campaign called Kick for Cash, coinciding with the run up to the 2016 UEFA European Championships or Euro 2016, with an online ‘penalty challenge’ game offering consumers the chance to win a share of £1m.

The on-pack promotion will appear on more than 8.5 million bags, including best-selling SKUs Toffee, Cinema Sweet, Sweet & Salted, Salted, and Sweet. Consumers will be driven to the Butterkist website, www.butterkist.co.uk, where they can register their details and then enter the barcode from their pack to be able to play the penalty shootout game.

They then get to control a penalty kick and will be instantly told if they have won one of the cash prizes on offer, which will be worth £10, £50, £100 or £1,000. Everyone who takes part in the promotion will be rewarded with a 50p Money Off Next Purchase coupon for Butterkist popcorn.

The campaign will run from May 2nd to August 31st with promotional packs in all the major multiples, convenience stores and wholesalers.

The promotion was created and will be managed by agency Lime Communications.

Butterkist is not a sponsor of the Euro 2016 tournament and so has to be careful to avoid suggesting any official link. As a result, its marketing will focus on encouraging people to share their enjoyment of the upcoming summer of sport, particularly football. It ran a similar promotion, Try for Cash, during last year’s Rugby World Cup.

Anjna Mistry, Senior Brand Manager for Butterkist, says: “The ‘Try for Cash’ promotion last year during the Rugby World Cup was very successful and I look forward to the Kick For Cash promotion generating more incremental sales as the chance for consumers to win a share of a bigger prize fund increases. Football is a sport that unites the nation and Butterkist is one of the few snack brands that brings people together, making it a perfect snack to enjoy whilst friends and family get together during this sporting event.”

Butterkist is the UK’s leading brand of popcorn with around 40% of the £90m market. It is owned by Tangerine Confectionery.