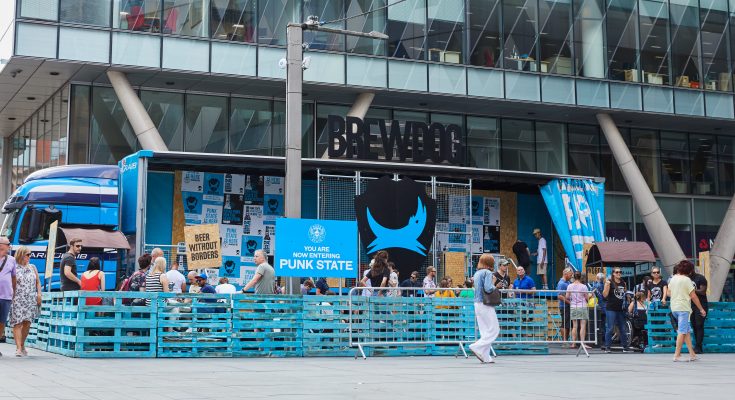 The campaign, created by brand experience agency Amplify, kicked off last week with the Scottish brewer setting up an independent ‘Punk State’ in Manchester city centre, complete with checkpoints, where Mancunians were able to get free cans of Punk IPA.

Over the next four weeks, BrewDog’s Punk State will be declared in Bristol (19th-22nd July), Birmingham (26th-29th July) and Liverpool (3rd-6th August).

Punk IPA has been the best-selling craft beer in UK supermarkets for the last three years. In just over a decade, the Aberdeenshire brewer has transformed from two men and a dog brewing small batches in a garage, to shipping a record 65 million bottles of beer to over 60 countries annually. This growth has been powered by its record-breaking ‘Equity for Punks’ crowdfunding initiative, which has seen the brewery raise over £60 million since 2009 from more than 82,000 passionate craft beer fans across the globe.

BrewDog set up its Manchester Punk State with a ‘roadblock’ at Spinningfields on Friday 13th and Saturday 14th of July. Visitors to the State were issued with a Punk Passport and visa stamp and a cold can of Punk. Foot-operated can crushers were available on site, in compliance with the brewery’s no-wastage policy.

From 3.00pm on Thursday 12th July, Mancunians who tweeted @BrewDog using the hashtag #PunkState with their reason why they should receive free beer were in with a chance to get cases of free cases of cold Punk IPA dropped off by BrewDog’s street team and its chilled vans. The #PunkState tour ran until 9pm on Sunday 15th July.

In addition to the roadblock and beer drop offs, from Thursday 12th July to Saturday 14th July, Mancunians were able to enjoy Punk IPA across the city. The brewery hopes this ‘mass conversion’ exercise will bring in new long-term supporters and advocates of the craft beer movement.
Over 30 venues participated in Punk State.

BrewDog launched its first Manchester bar on Peter Street in 2012 with a ‘crap beer amnesty’- allowing Mancunians to swap a can of mainstream lager for a Punk IPA. Over 300 cans were swapped at launch, and the surrendered cans were destroyed and recycled. Later this year, the brewery will open its second bar in Manchester in the University Green development. The site will feature an on-site BrewPub that will produce small-batch beers exclusively for the bar.

BrewDog’s cofounder James Watt says: “Punk State is the culmination of the craft beer revolution. We are putting Punk IPA directly into the hands of the masses and placing faceless megabreweries on notice. Manchester has been one of the cradles of the UK’s ever-growing craft beer movement and we hope Punk State helps add to the ranks of the passionate fans.”