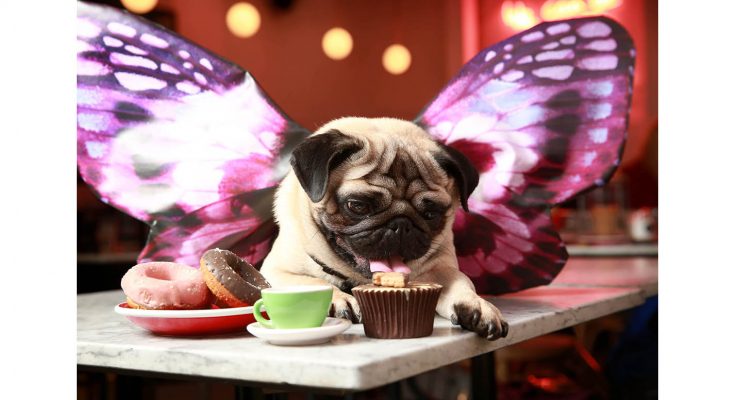 Mobile phone network Three will be running a pop-up ‘All You Can Pug’ brunch to celebrate Puggerfly, the star of its latest ad campaign and, the network claims, the world’s first Augmented Reality (AR) pet.

Three has teamed up with the Pug Café, UK’s leading pop-up event provider for pugs, to create an immersive experience for dog owners and admirers alike. A limited number of tickets are available, priced at £5, which entitles the holder to one 75-minute brunch slot including one main breakfast dish, bottomless pastries, prosecco and coffee or tea, as well as food for their dog, if they bring one.

All proceeds from the event will be donated to the Pug Dog Welfare & Rescue Association.

The pop-up ‘All You Can Pug’ brunch, which will take place on Saturday May 12th, follows the recent announcement that Three has added Snapchat to its range of services offered as part of Go Binge, allowing customers to snap, chat and share without using their data allowance. Three also unveiled the new star of its ad campaign, Puggerfly, a squishy-faced, purple-winged pug, created, according to the network, to embody all things social and fun.

Puggerfly allows users to access different consecutive Snapchat lenses across seven days, letting them nurture and love their Puggerfly as he grows from a ball-chasing, rainbow-pooping puppyfly right through to a fully-fledged flying Puggerfly. Snap’s 12 million UK daily active users can interact with the animated dog, no matter what network they are on. Users can feed Puggerfly treats, play ball with it, enjoy sloppy dog kisses and even watch it twerk to dance music. The seven lenses launched on April 26th, one per day; after the seven days are up, they will be available to Snapchat users via Snapcodes that will be incorporated into Three’s UK wide advertising and media campaign.

The Pug Brunch was created and managed by Three’s PR agency, W Communications.

Three’s ‘All You Can Pug Brunch’ will take place simultaneously in London and Liverpool, with dog owners and admirers invited to head to Covent Garden Grind in London and Love Thy Neighbour in Liverpool for bottomless brunch dishes and the chance to pet pugs. Guests also have the opportunity to capture photos of themselves with Puggerfly’s giant rainbow poo statue (recently seen roaming London’s capital’s streets), dress up their pampered pooches as Puggerfly, or sample all seven Puggerfly Snap codes.