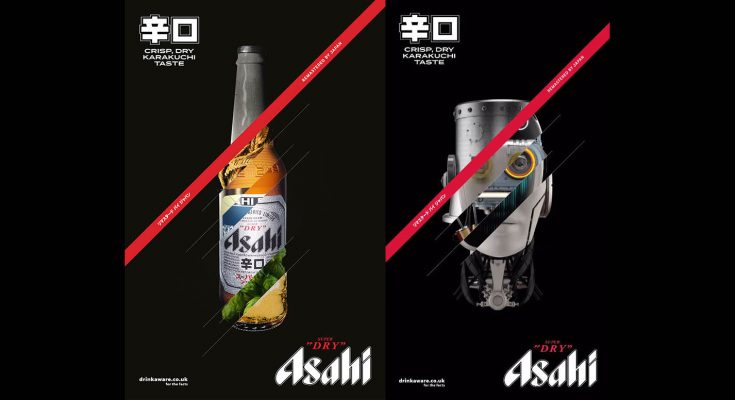 Asahi Super Dry, the Super Premium Japanese beer, has launched a significant outdoor and online advertising campaign, as well as embarking on a series of partnerships – including this weekend’s Arcadia Festival – that will see the beer at the forefront of immersive experiences across London this summer.

The ‘Remastered by Japan’ OOH campaign has been featuring on more than 600 digital road, rail and London Underground display sites this month, along with larger scale placements in prominent locations such as Shoreditch and Borough High Street.  A heavy-weight social media campaign will also run nationally, creating significant impact for the newly relaunched brand.

The brand has also signed a number of partnership deals which will see it featuring in a number of immersive experiential activations.

For the first time, Asahi Super Dry is the official beer partner of Secret Cinema Presents Blade Runner – The Final Cut: A Secret Live Experience. The 1982 cult classic, set in a dystopian world, explored themes that were way ahead of its time, aligning perfectly with the values of Asahi Super Dry as a progressively minded brand. There will be 80 secret live experiences running until the end of June.

The brand is also the lead beer at dotdotdot London’s latest release, VR experience Somnai, mixing live performance and multisensory elements with immersive technology, while this Bank Holiday weekend (May 5th and 6th) Asahi Super Dry will partner with Arcadia for its 10th anniversary spectacular.

In addition to the above, Asahi Super Dry will be celebrating summer with an array of music gigs and films at the Somerset House Summer Series and Film 4 Summer Screen across July and August.

Laura Mitchell, Director of Brand Marketing at Asahi UK Ltd, says: “When we relaunched Asahi Super Dry earlier this year, we wanted to ensure its marketing would reflect the identity of the brand and put us at the heart of forward-thinking experiences, with a mix of Japanese culture. We’re delighted to be partnering with some truly exciting experiences that feed consumer curiosity and showcase the brand in a contemporary manner.  We strongly believe the ‘Karakuchi’ taste of Asahi Super Dry will make a huge impact, but it is equally important we pay homage to the brand’s heritage and we are very excited to launch into the marketplace with a number of intriguing activations.”