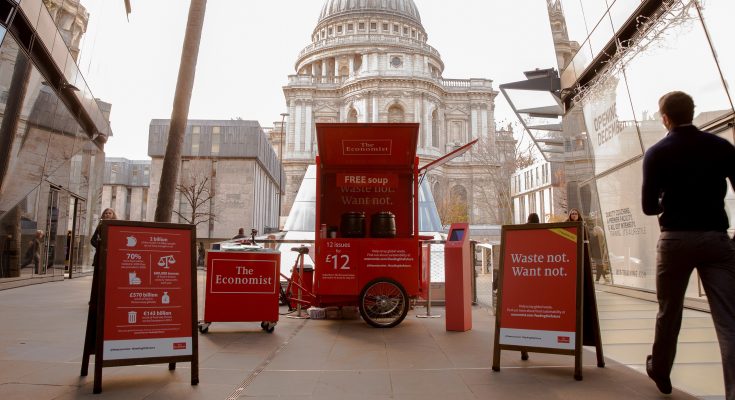 In a new twist on its #feedingthefuture campaign, The Economist is encouraging Londoners to try free nutritious soup made from vegetables destined for the rubbish bin. Engaging with people through a branded mobile trike, the iconic newspaper is showing people that ugly, discoloured or misshapen produce, which is rejected by supermarkets can still be eaten and tastes great.

The campaign, devised by marketing agency Sense, forms part of The Economist’s successful ‘Real World’ experiential strategy designed to increase the media brand’s subscriptions through bringing its content to life in the real world.

Supermarkets’ and consumers’ obsession with ‘perfect’ fruit and vegetables is contributing to the global food waste problem, with 600,000 tonnes of food thrown away each year in the UK by restaurants alone.

Commenting on the latest activation, Sense Senior Account Manager Daniel Hennessey adds: “Giving away warming tasty waste-food soup on a cold winter’s day is a great way to get people talking about The Economist’s content in an engaging way. By challenging people’s perception about the food we throw away, this activity self-selects the globally curious consumer – just the kind of people who enjoy reading The Economist – increasing brand awareness and driving subscription sales at the same time.”

The campaign started on 29th November in Liverpool Street, before visiting One New Change (30th November). It will also visit Denmark Hill (4th December) and Victoria Station (5th and 6th December). It will then run from January to March 2018 at various other London locations including Canary Wharf, Waterloo, Paddington, Euston, King’s Cross and London Bridge.

To date, the #feedingthefuture campaign has generated more than 60,000 subscribers globally for The Economist across five continents.