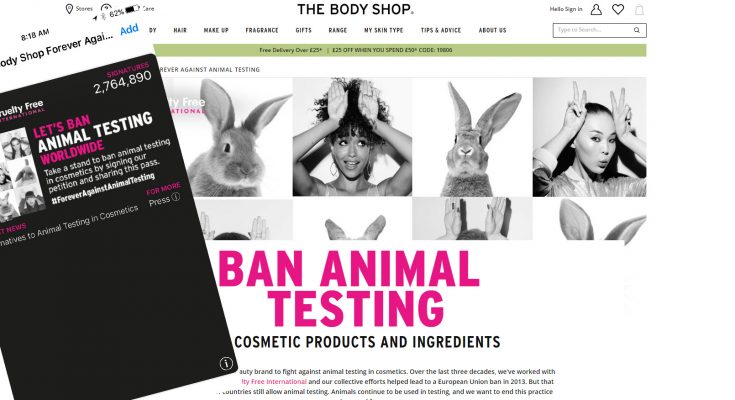 The Body Shop has partnered mobile marketing specialists Urban Airship to launch a mobile wallet pass with the latest news and signature counts for its Forever Against Animal Testing campaign.

The campaign will use mobile wallet passes to deepen ongoing engagement with supporters and help grow the 2,800,000+ signatures already collected online and in-store.

Launched in June alongside Cruelty Free International, The Body Shop’s Forever Against Animal Testing campaign aims to end cosmetic animal testing worldwide through a petition that will be taken to the UN.

Harriet Williams, Chief Digital Officer, The Body Shop, says: “Mobile wallet passes offer us the perfect vehicle to spread the word and grow support for our efforts to end cosmetic animal testing globally once and for all. The ease of creating, distributing and updating mobile wallet passes, combined with the high rate of social sharing, will help finish what The Body Shop started when we began campaigning against animal testing in the 1980s.”

On signing the petition online, people will be directed to a landing page where they will have the option to add the Forever Against Animal Testing wallet pass to their device. The wallet pass will also be linked in a thank you email, promoted by The Body Shop on social media channels and will provide regular news updates direct to users. Those receiving the pass from friends sharing it will automatically get a link to where they can sign the petition. Supporters can also use the campaign hashtag #ForeverAgainstAnimalTesting on social media to raise awareness of the issue.

A recent Urban Airship study of one million Apple Wallet coupons and loyalty cards of major retail brands found that more than three-quarters of passes installed were the result of sharing rather than being distributed through a brand’s channels. Apple Wallet coupons had the highest rate of sharing, each one being added to 4.3 other devices on average, which The Body Shop’s cause-related campaign is expected to eclipse.

“We’re proud to be lending our expertise and mobile wallet engagement solution, Urban Airship Reach, to this largest and most ambitious attempt to put an end to cosmetics animal testing globally,” said Brett Caine, CEO and president, Urban Airship. “The Body Shop’s effort will offer a textbook example of how easily and flexibly mobile wallets can be used to inform, inspire and activate audiences for a limitless range of purposes.”

Founded in 1976 in Brighton, England, by Anita Roddick, The Body Shop is a global beauty brand. The Body Shop seeks to make a positive difference in the world by offering high-quality, naturally-inspired skincare, hair care and make-up produced ethically and sustainably. The Body Shop pioneered the philosophy that business can be a force for good and this ethos is still the brand’s driving force. The Body Shop has more than 3,000 stores in more than 60 countries.

The Body Shop was the first international beauty brand to campaign against the practice of animal testing in cosmetics in 1989, leading the way to a European Union-wide ban on animal testing in 2013. Its Forever Against Animal Testing campaign, in partnership with charity Cruelty Free International, was launched in June 2017 and achieved 2 million signatures in its first two months.