Home industry Take the fake out of political advertising 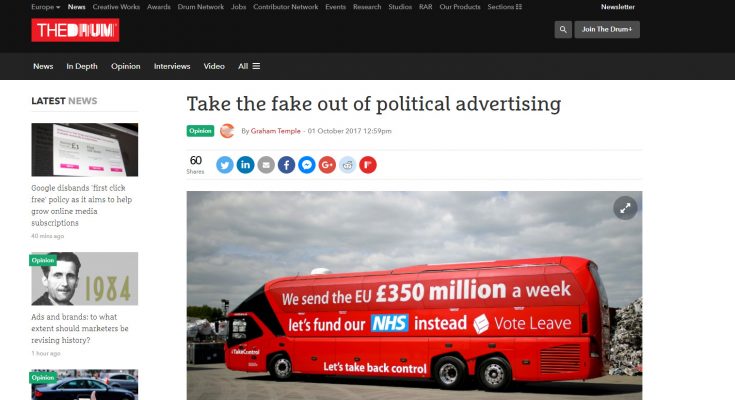 Take the fake out of political advertising

The following comment was written by Graham Temple, former Chairman of the Institute of Promotional Marketing, and published on The Drum.

Whenever you come across an advert in the newspaper or the bus on the way to work for a new breakfast cereal, mobile phone or even a bed bought on finance, you can usually be assured that what you are reading in that advert is the truth.

In fact, anything termed as “general advertising”, on the most part, should be a fair reflection of the product or service being promoted. That is because of the highly regarded Advertising Standards Authority (ASA) which protects the consumer by ensuring that all “general” ads are legal, decent, honest and truthful.

And if, following its robust complaints investigation process, an ad does not comply with the Advertising Code then the advertiser will soon know about it. This will include the ruling being published online and a request for the advertiser to immediately withdraw the offending ad.

So if you happen to be lying on your new Sealy mattress while eating your Shreddies and talking into your Samsung s8, then you can rest assured, literally, that someone out there is looking after your best interests when it comes to information you are given before making a decision to purchase such items.

However, when it comes to political advertising you might be surprised to find out that the opposite is the case. No one is monitoring and regulating the claims and promises made in advertisements from those who wish to, or already, govern Britain.

And why is that such an issue? Well, the problem is that Frank, my postman, doesn’t know that. Like Ali, who works at the Tesco Express in my village, neither of them knew there were two types of advertising: one classified as “General” and the other as “Political”.

They are in good company. Until the European referendum last June, the general public, and I include myself in this, were almost totally unaware that this was the case. For Frank and Ali this is understandable, why would they know?

It wasn’t until the build up to Brexit at the start of last year that I became aware that this was the system. With more than 30 years’ experience in the marketing business, and at the time chairman of the Institute of Promotional Marketing (IPM), an industry body and part of the regulatory system, I remember wondering if I was the only experienced marketeer who didn’t know this fact. Feeling slightly baffled, I mentioned this during an IPM board meeting and discovered that I was certainly not alone as most of my colleagues were equally uninformed. I was both relieved and disappointed.

Relieved to discover I was not alone and disappointed that as guardians and protectors, admittedly working in a specialist non-advertising area of self-regulation, we were not aware of this anomaly. Simply put, more protection is afforded to the information you are provided when buying a soap powder than given to voters when selecting the next party to lead this country; or in the case of Brexit, whether to be part of the largest trading market on the planet.

Unfortunately, there was no authority or code of practice in place for verifying Vote Leave campaign’s claims to fund the NHS instead of sending £350m a week to the EU, the ‘Turkey is joining the EU’ poster nor the Treasury’s mailshot claiming UK families would be £4,300 a year worse off if Britain left the EU.

Without doubt political advertising should be regulated, but it probably is not possible for several reasons. Not least because the short time frame of any election campaign makes it likely that any investigation of claims could still be ongoing after the election has taken place. It would be a bit like disallowing the winning goal in the FA Cup final several weeks after the trophy was handed over, but with far greater implications.

But I believe that there is something that can be done very easily and done right now. All it needs is this: the addition of a simple disclaimer or health warning such as required for financial ads, “interest rates can go up as well as down”, or in the case of alcohol, “drink responsibly”.

To fix the problem, political adverts need to be transparent and let the voter know that the claims made in such ads have not been previously verified, because they haven’t. This would keep political parties on their toes and encourage the voter to be more vigilant before making potentially life changing choices.

I have a feeling that political parties are unlikely to willingly embrace this idea, why would they be? A metaphor involving turkeys voting for Christmas springs to mind. But it may well be time for us voters to ask for a change in law and perhaps the starting point is via a parliamentary petition. We can’t continue to vote for the future of this nation based on mistruths and lies and this small change would go a long way to at least making the public aware that not everything they see is fact.