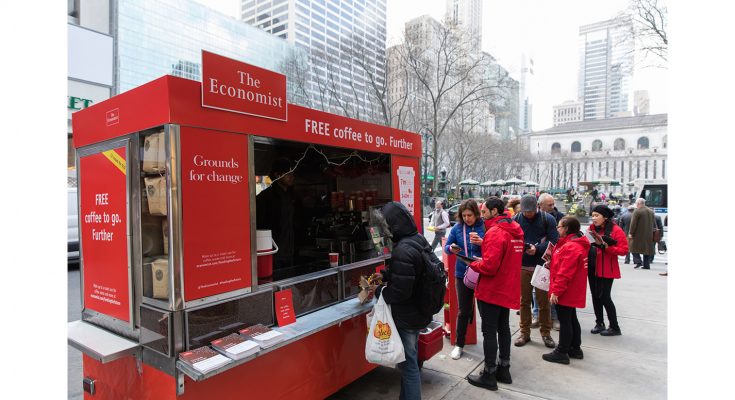 Sense US launches with Economist’s #feedingthefuture

The recently-opened New York office of UK marketing agency Sense has run its first campaign, with the April launch in New York of experiential campaign #feedingthefuture for The Economist.

Sense won The Economist’s North American business in late 2016 following a competitive review; Sense London has been the agency of record for the company in the UK since 2014 and has run a number of awards winning campaigns for the global business and economic magazine where a carefully-targeted potential subscriber base is offered challenging, thought-provoking experiential activations, which have included handing out free ‘cat poo’ coffee and crepes made with insect flour.

The New York #feedingthefuture campaign is aimed at highlighting the impact of food waste on the environment. Running until mid-May, The Economist will have a branded coffee cart at select locations throughout New York City, offer passers-by a free cup of coffee in an effort to highlight innovative uses for used coffee grounds.

The program, entitled “Grounds for Change,” is based on The Economist’s report “Oil in Your Coffee,” which articulates little known uses for used coffee grounds including creating biodiesel fuel. Consumers who participate in the program will have the opportunity to subscribe to the publication at an introductory rate of 12 weeks for $12; as a special gift they can opt to have The Economist plant a tree on their behalf.

In the coming months, Sense will launch the #feedingthefuture campaign in Boston, Philadelphia, San Francisco and Washington D.C.

The Economist has worked with Sense to develop the #feedingthefuture framework covering The Economist’s live content marketing programs, which are aimed at attracting new readers to the publication through creative and provocative real world experiences. Launched in the UK in 2014, to date more than 30,000 new subscriptions have been generated through this activity worldwide. The Kopi Lowak Coffee activity, which saw potential subscribers offered free coffee made from coffee beans eaten and then excreted by South East Asian civet cats – the most expensive coffee beans in the world – won a Gold in the IPM Awards in 2015.

Sarah Priestman, President, Sense New York says: “We’ve always held an ambition to expand overseas, and being appointed to handle the North American business for The Economist provided us with a great opportunity to start an agency, with a team and resources. This was an important strategic investment in the growth of Sense and we are already talking to other global clients about extending our relationship into North America.”

Sense is an experiential marketing agency that creates authentic connections with consumers in the real world. As a response to media fragmentation, ad blocking and consumer cynicism, Sense has developed an approach that breaks through the clutter, reaching people at the optimum points for relevance and receptivity. The agency manages brand campaigns from strategy through evaluation.