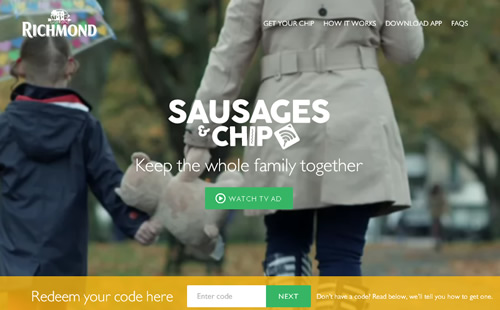 Kerry Foods’ Richmond Sausages brand is launching a new £3m integrated ‘Sausages & Chip’ campaign, giving families the chance to win one of 200,000 microchips that can be used to locate lost toys.

The on-pack promotion is running across the entire Richmond Sausages range until February 16th 2016 and will be supported by a multi-media campaign.

The idea behind the promotion is that parents will go to extreme lengths to protect their children’s most treasured items. Sausages & Chip will help families avoid the common scenario of lost toys by offering the chance to win a special tracking chip, which can be attached to a child’s favourite toy.

The campaign’s first TV ad – featuring the strapline ‘Keeping the Family Together’ – went live during a 60-second spot during the X-Factor on 28th November, with the campaign predicted to reach 85% of Richmond’s target audience on TV alone. Meanwhile, video content on social media and digital content across Amazon, Ebay and Asda.co.uk should ensure that millions of families throughout the UK are aware of the campaign.

Extensive in-store point of sale material – including window posters and shelf barkers for convenience retailers – will also be available across all channels to excite shoppers at the shelf.

Sarah Davies, senior brand manager for Richmond, says: “Sausages & Chip will be our biggest campaign of the year, and comes at a key sales period when sausages are a meal-time favourite for families and an essential Christmas dinner ingredient.”