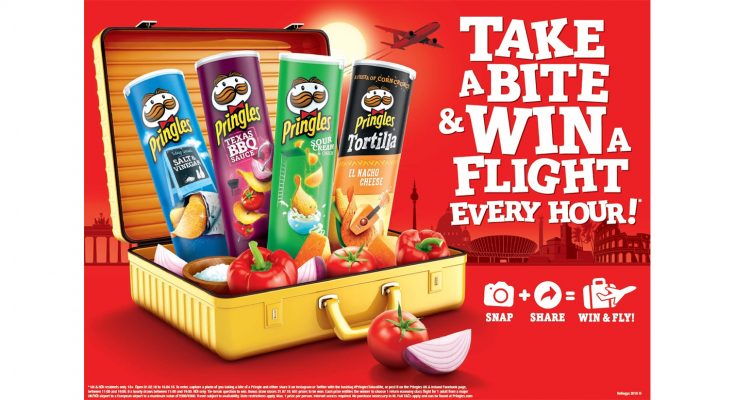 Kelloggs-owned savoury snack brand Pringles is running a promotion offering consumers the chance to win £300 in free flights to European destinations every hour, by posting pictures of themselves taking a bite of a Pringles chip to social media.

The promotion opens on February 1st and closes on April 16th 2018. There will be one winner drawn at random every hour from 11.00am to 7.00pm, with a final ‘mop-up’ draw for entries received after the closing date and before the end of July. There will be 601 prizes awarded in total, consisting of £300 towards a return direct flight to a European destination for one person. Winners will be able to put the £300 towards a more expensive flight and pay the excess, but may be charged a handling fee by the prize management agency working on the promotion.

Consumers are restricted to entering once per person per day and can only win one prize during the promotion.

Winners will be informed via Direct Message on Facebook, Instagram or Twitter within seven days of the hourly draw taking place. They will then have seven days to respond, or the prize will be re-awarded.

Winners will be notified via Direct Message on Facebook, Instagram or Twitter within 7 days of the hourly window and will be required to provide personal details to progress with prize fulfilment.

There is a No Purchase Necessary entry route for residents of Northern Ireland, while those from the Republic of Ireland whose names are drawn will have to answer a tie-break question correctly in order to be deemed a winner. This is because both Northern Ireland and the ROI have slightly different laws governing prize draws to the UK (and to each other).

Prize management and fulfilment is being handled for Pringles by Cloud Nine Incentives, which is a member of the Institute of Promotional Marketing.