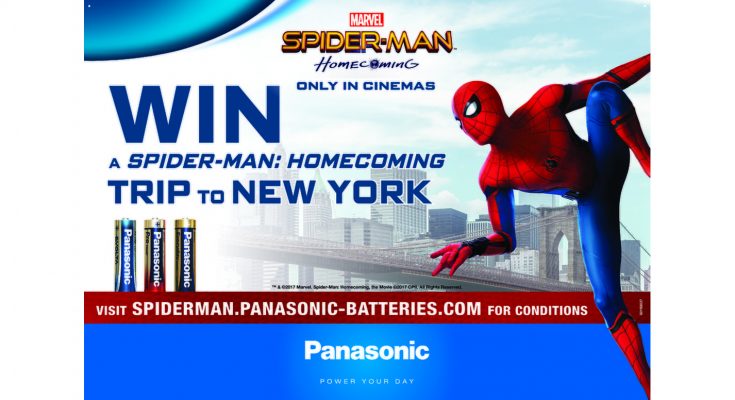 Panasonic  has launched an on-pack promotion in the UK in conjunction with the release of the Sony film, Spider-Man: Homecoming.

The promo offers consumers the chance to win Spider-Man themed prizes and the star prize of a family trip to New York. Promotional packs are also offering extra batteries for free.

To enter the competition, consumers have to register on the competition website and then start building a ‘digital web’ by inviting friends and family to link with them.

The person with the largest web when the competition closes at midnight on December 31st, 2017 will win the star prize of a four-day family trip to New York – Spiderman’s home town – plus a range of experiences including a Spiderman-themed ‘escape room’, stunt training, a trip to The Museum of the Moving Image in Peter Parker’s home neighbourhood of Queen’s and a trip up the One World Observatory, one of the tallest buildings in the world.

The next 29 ranked entrants will win goody bags with a range of Spider-Man merchandise in them.

The competition runs in all European countries except Italy (due to local Italian laws on prize promotions).

Tim Clark, Panasonic Energy UK sales and marketing manager, says: “Previous film associations have successfully helped us engage with our core audience of families with children. I am confident that by teaming up with such a recognised and popular franchise as Spider-Man, it will really increase sales in the category.”

Panasonic promotional packs are available now until 31 December 2017, and branded POS tools are available for retailers in more than 30 European countries.

The Panasonic Corporation is a leading company worldwide in the development and manufacture of electronic goods for a wide range of private, trade and industrial uses. Panasonic, based in Osaka, Japan, posted sales of around 57.28 billion EUR last year.