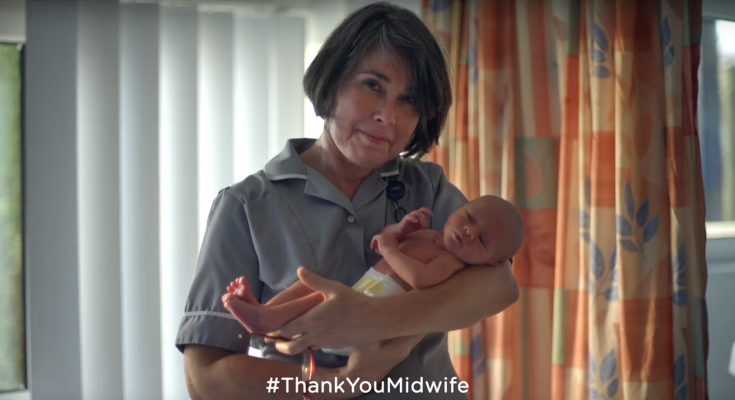 Pampers has launched a nationwide #ThankYouMidwife TV and social media campaign aiming to deliver a ‘thank you’ to each of the nation’s 40,000 midwives for everything they do for expecting families. The campaign will also raise money for the Benevolent Fund of the Royal College of Midwives.

Pampers points out that while the rest of the UK will be tucking into thei turkey, midwives will be delivering 1,400 babies. Whilst 80% of UK mums say it is important to thank their midwife, only 58% admit they actually do so. As a result, one in three midwives feel underappreciated despite putting new life into the arms of parents every day.

The festive 60” TVC was developed by Saatchi & Saatchi London. It features the maternity wards at the Princess Anne Hospital in Southampton and New Forest Birth Centre and showcases the diverse tasks midwives undertake, with passion and care, in order to help bring the most precious gift into the world: babies. It features real footage of midwives going about their daily duties with real families and is set to the Christmas carol, “The 12 Days of Christmas” with a wry twist on the lyrics.

The TV and VOD campaign, with media planning and buying executed by Publicis Media, will run until December 31st 2017 and is also being amplified across social media channels including 5” GIFs and conversation cards on Twitter. A targeted consumer PR and influencer outreach campaign will be executed by MSL featuring Katie Piper as Pampers Brand Ambassador.

Earlier this year, Pampers released the campaign ‘Little Fighters’, which launched its Preemie Protection nappies for premature babies. The emotive TVC followed nine real families, their premature babies, and the hospital staff at the Neonatal Unit at the same Southampton hospital.

Caroline Gorrie, Pampers Brand Manager, says: “Pampers want to support the UK’s midwives for their important role in the happy, healthy development of every baby. After working so closely with midwives on our Preemie campaign, we’ve seen how much they give. In return, we want to give midwives a national celebration this Christmas, and all year round.”

Gill Walton, Chief Executive and General Secretary at the Royal College of Midwives (RCM), comments: “The RCM is delighted that Pampers have designed a campaign to thank midwives for the incredible work they do. Midwives and Maternity Support Workers (MSWs) work tirelessly to deliver the very best care and support to women and their babies and often in difficult circumstances.

Walton adds: “The RCM now has over 47,000 members and some of our members do fall into financial difficulty. The Benevolent Fund of the RCM Trust is a charity that supports our members in times of financial need. The Benevolent Fund has little income compared to the need and there is always a need for additional funds in order for the fund to help more midwives in need. That is why every single hashtag used during this campaign can really make a big difference.”

Pampers is a part of The Procter & Gamble Company and is the #1-selling nappy worldwide. Every day, more than 25 million babies in 100 countries around the world wear Pampers. P&G serves consumers around the world with a brand portfolio including Always, Ambi Pur, Ariel, Fairy, Febreze, Gillette, Head & Shoulders, Lenor, Olay, Oral-B, Pampers, Pantene and SK-II. P&G operates in approximately 70 countries worldwide.

The Royal College of Midwives’ Trust Benevolent Fund is a charity whose main aim is to support midwives and maternity support workers in times of financial need, helping to get lives and careers back on track. It works in partnership with the Cavell Nurses’ Trust to meet this aim.