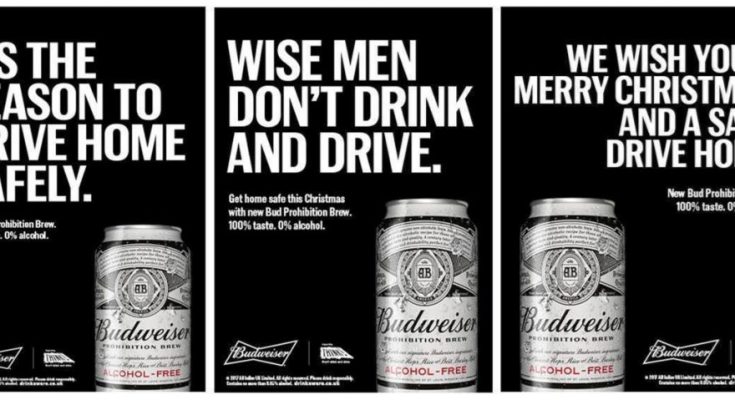 AB InBev, the world’s biggest beer company, has been supporting its new alcohol-free beer, Budweiser Prohibition, with a UK anti-drink drive digital and Out Of Home campaign, plus a sampling drive through Tesco.

A major ad campaign centres on people getting home safely for Christmas. The global beer brand is supporting the Department for Transport (DfT) for its THINK! Christmas campaign, designed to tackle drink driving.

The OOH ads and the digital push run until December 31st 2017, delivering a series of festive but pertinent messages encouraging people to make smart drinking choices during the festive period and get home safely for Christmas.

A key part of the campaign is a nationwide giveaway of Budweiser Prohibition, via a digital Budweiser Christmas card from www.budprohibition.com, to be redeemed in Tesco outlets.

Rowan Chidgey, Marketing Manager for Budweiser UK, says: “As an iconic global beer brand, we not only have a responsibility to help fight important issues like drink driving, but also to make it easier for people to make smart drinking choices. We’re really pleased to be supporting THINK! to keep safety front of mind this Christmas and proud to make great products like Budweiser Prohibition, so party-goers can enjoy beer as well as moderation. We’ve put it at the heart of our responsible drinking campaign this year, so as many people as possible can celebrate this Christmas and get home safely.”

The THINK! drink drive campaign coincides with the National Police enforcement campaign, which runs throughout December.

While road casualties caused by drink driving have fallen dramatically in recent years, the latest statistics recorded 5,730 accidents and 8,470 casualties in England and Wales in 2015 due to drink driving.

Road Safety Minister Jesse Norman said: “Thanks to generations of THINK! campaigns, drink driving has become socially unacceptable, with an 88% drop in fatalities over the last three decades. This year’s THINK! campaign builds on that record, working to prevent this devastating behaviour, which puts so many lives at risk.”

This year’s Budweiser campaign is part of AB InBev’s Global Smart Drinking Goals, which seek to reduce the harmful use of alcohol with an investment of one billion dollars across the globe in marketing campaigns to influence social norms and change behaviours – to measurably decrease harmful alcohol use over the next ten years. One of the goals is for 20% of AB InBev’s volumes to be low-to-no alcohol by 2025. Budweiser Prohibition will be a major contributor to this goal as an alcohol-free beer.

AB InBev is a founding member of the UK self-regulatory body for alcohol marketing, the Portman Group, and a major funder of the independent Drinkaware Trust.