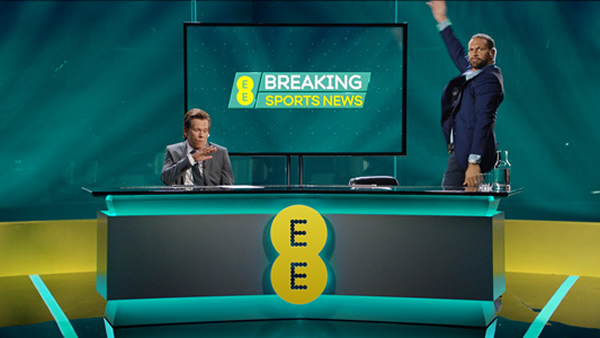 Kevin Bacon and a host of football greats are appearing in EE’s latest TV ad, promoting the fact that EE customers are being offered six months free access to BT Sport channels.

The TV ad is part of a multi-million pound, multi-channel brand campaign to launch the offer.

Their broadcast is interrupted by the breaking news of EE signing the BT Sport App deal for customers. Kevin quickly cuts to live reactions from some the biggest names in football, including Jürgen Klopp, Claudio Ranieri, José Mourinho and Harry Redknapp.

The 40 second TV ad launched last week and is airing across all commercial channels. It is also available on YouTube here. Other ‘Breaking Sports News’ creative will run across print, OOH, retail and social media alongside a unique execution of the TV ad for digital.

Hugely popular eight-part YouTube online football series The Wembley Cup is also returning for a second year and will be used to target the YouTube audience with the BT Sport App offer. Fans will be able to follow the two teams, Spencer FC and Weller Wanderers, each captained by popular YouTubers, as they battle it out in a series of challenges. The final squads, including EA SPORTS FIFA legends exclusive to XBOX, will meet for a star-studded LIVE final at Wembley Stadium connected by EE on September 2nd.

Max Taylor, MD of digital, comms and innovation, EE, said: “This is the one of our biggest integrated brand campaigns to date for one of our most exciting customer offers since we launched EE. We know how much our customers like watching content on the go – particularly sport – and this offer is a fantastic example of the added benefits our customers get now that we’re part of BT Group. We are always looking at new ways to showcase the quality of our unrivalled superfast 4G network and providing the best content for our customers is an important part of that.”

From this week, EE customers on consumer and small business pay monthly handset, tablet and SIM only phone plans will be able to access to all the BT Sport channels on their smartphone or tablet. Sports fans can stream the most anticipated action live, or watch highlights over EE’s award-winning 4G network as well as WiFi whenever they choose.

The BT Sport offer is the first of a series of benefits to be made available to EE customers now that EE is part of BT Group, and the first time that a BT service will be promoted through EE’s retail stores nationwide.