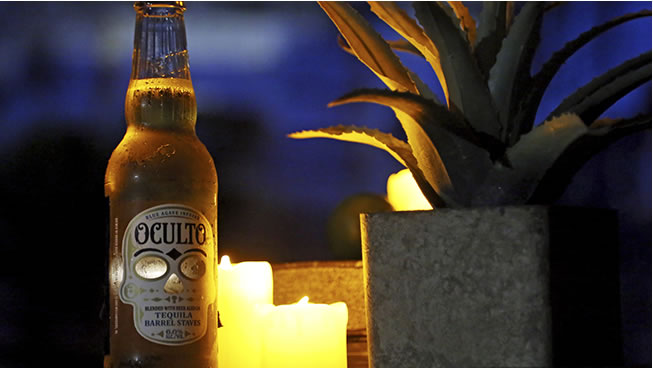 Oculto, a Tequila-flavoured beer from Anheuser-Busch InBev in the US, ran a promotion in November and December 2015 where fans could scan their bottles, get connected to a special app and win prizes.

The limited edition bottle, which also featured an innovative label that lit up, was launched at a special event at the end of November.

The bottle features LED lights underneath its label. When consumers hold it in the right way, they activate a pressure-sensitive switch which turns on the LED lights, causing the eyes of the Mexican-style skull mask design on the label to glow.

Additionally, when drinkers scanned their bottles, they were connected to a web app called Relics of the Night, which let them interact with the brand digitally and potentially earn rewards and prizes by posting comments and photos to social media.

Oculto, a lager blended with beer aged over tequila barrel staves, launched in the US March 2015, targeting a young tech-savvy demographic. At launch, labels featured various hidden details including messaging that only appeared when the beer was cold.

Mallika Monteiro, senior director, Oculto at Anheuser-Busch, said at the launch of the limited edition bottle: “With the original Oculto packaging, we focused on creating a truly innovative bottle with a host of discoverable elements – everything from hidden messages on the back of the label to eyes that mysteriously appear when the bottle gets cold. Oculto’s unique positioning and social nature inspired both the illuminated bottle and the Relics of the Night digital activation to further highlight the personality and social nature of the beer.”

The pressure switch is placed where the thumb naturally falls while holding a beer bottle, and once pressed the LED lights begin to shine through the eyes of the mask on the front of the bottle for about three to four seconds. The special edition bottle will be featured at select Oculto events in 2016.

The “Relics of the Night” geo-targeted web application was initially only available during November and December 2015 in the Miami area of Florida. Adults 21 and over attending selected events could participate by scanning the Oculto mask on their bottle, signage, or napkin, and uploading their image to Oculto.com/scan. Once uploaded, consumers were given a chance to “spin the bottle” and win prizes.

It is not know if AB InBev plans to use the same technology for future Oculto special promotions, or even to roll it out across some of its other brands.