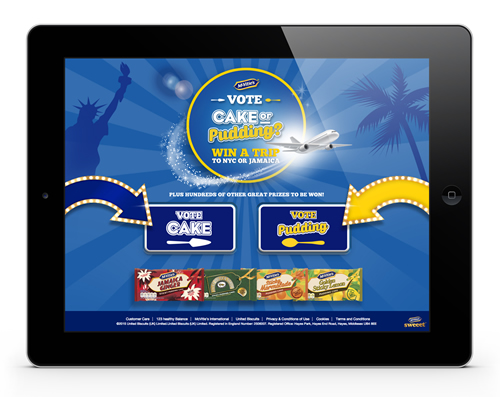 United Biscuits is re-launching and extending its range of Sticky Pudding Cakes and is supporting the move with an on-pack promotion offering consumers the chance to win a range of prizes including trips to New York or Jamaica.

The promotion, which launched late December, was created by integrated marketing agency whynot!

The versatility of Sticky Pudding cakes provided the insight for the call to action, which encourages the public to vote whether the products are best eaten as a cake or a pudding.

Customers can pick up a promotional pack in store, go to the website and vote cake or pudding for their chance to win a trip to New York City or Jamaica as well as hundreds of other prizes.

The ‘Vote Cake or Pudding’ campaign will be supported with POS, digital and trade press.