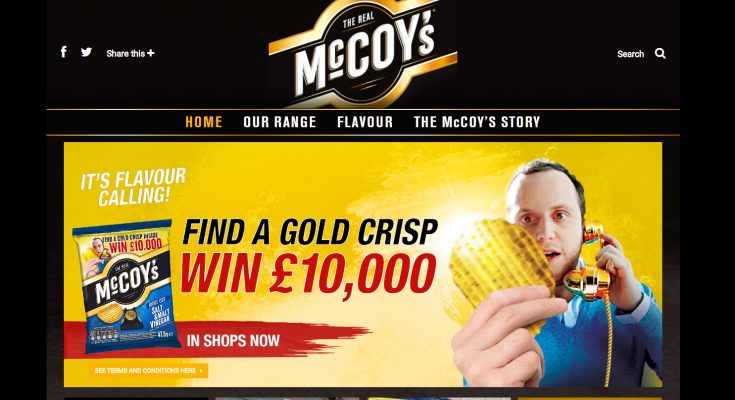 The promotion is being backed with a TV advertising campaign created by advertising agency WCRS. In the TV ad, which is also being used on social media sites, KP brand spokesman, everyman hero Thomas, gets a call from Flavour on his golden telephone receiver (a reference to McCoy’s over-arching ‘When Flavour Calls’ brand campaign) and starts searching his packet of Salt & Malt Vinegar McCoy’s to see if he has won.

On finding a Golden Crisp, his grey office is transformed with a Fort Knox challenging mound of gold, while his colleagues work on.

Daniel Winslet, KP Snacks Marketing Controller, said: “This campaign is all about the thrill of an instant win, whilst drawing a parallel that our crisps taste like gold. Creatively, it pushes the boundaries of the McCoy’s brand and the new ‘When Flavour Calls’ campaign.”

Billy Faithfull, executive creative director, WCRS said: “McCoy’s don’t do things by halves. So we weren’t about to let this one go without a goldie-looking T-Rex in a psychedelic shower of coins and carriage clocks. Obviously. It called for a simple solution to a simple promotion. It called for Flavour with a capital ‘F’. And we felt only one approach would do. Goldmageddon.”

The campaign runs on television and social channels through to mid-April.

The promotion is open to anyone aged 18 and over from the UK, excluding KP Snacks employees and anyone who works for the company. There is a No Purchase Necessary entry routes for consumers in Northern Ireland. Anyone who wins will need to have a UK bank account to receive their prize.

Consumers will know if they have won by finding a Golden Crisp and Golden Crisp Ticket in their pack. They will need to follow the instructions on the ticket to claim their prize, and must retain the Golden Crisp, Golden Ticket and original pack.

McCoy’s is made by KP Snacks, which is owned by German company Intersnack.