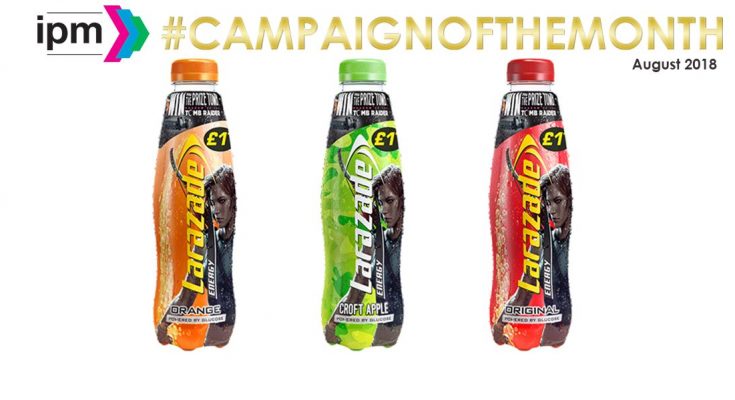 Aug 02, 2018, 09:23 amComments Off on Lucozade becomes Larazade in new Shadow of the Tomb Raider partnership

Lucozade Energy is temporarily changing its name to Larazade in celebration of Lara Croft, the iconic fictional character and the main protagonist of the video game franchise Tomb Raider. This activation comes as part of Lucozade Energy’s new partnership with the upcoming game release of Shadow of the Tomb Raider, the twelfth and much-anticipated entry in the franchise which has sold over 63 million copies worldwide. With 27m adult gamers across the UK, this is set to drive additional sales of Lucozade Energy.

The limited edition bottles, designed by BrandMe, which hit shelves in July, will feature an on-pack competition that gives adult gamers and Tomb Raider fans the chance to win from The Prize Tomb which features guaranteed prizes every day. Prizes to be won will include Xbox One X consoles, Tomb Raider games, over £40,000 of cash prizes and in-game currency with every bottle.

For a limited time only, more than 80 million of these promotional Larazade bottles will be available in Lucozade Energy Orange and Original flavours. To further drive the buzz around the new bottles for shoppers, a special edition flavour, Larazade Croft Apple, will also be introduced at Tesco and independent retailers.

Steven Hind, Head of Marketing from Lucozade Energy at Lucozade Ribena Suntory, stated that: “Putting Lara Croft and a competition on our bottles presents a great sales opportunity for retailers by ensuring the brand is front of mind in the run-up to the game launch, while also giving all drinkers the opportunity to win some amazing prizes. Building Lucozade Energy’s association with the Tomb Raider franchise provides retailers with the chance to capture a unique new audience and boost their soft drinks sales.” Lara Croft has featured in Lucozade’s advertising since its sponsorship in 1998. Following its recent successful partnership with the new Tomb Raider film back in March, this new promotional activity continues to build on Lucozade’s association with the Lara Croft character.