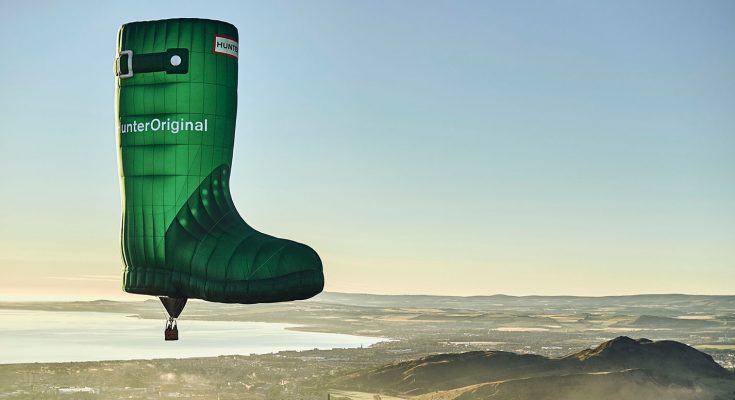 This July, Hunter, the well-known rubber wellington boot and footwear brand, recently launched a giant hot air balloon in the shape of their iconic Original Wellington Boot. Lifting off from Hunter’s birthplace of Scotland, ‘The Original Flying Boot’ will tour the globe, appearing at festivals, sporting events, shows and other key outdoor calendar moments; sometimes announced, other times by surprise.

In addition to its appearances, boot spotters from around the world that post pictures of the boot using #HunterOriginal enter the chance to win a Hunter prize.

Designed to celebrate the brand’s 162-year heritage, and in recognition of its birthplace, The Original Flying Boot first lifted off from Scotland before travelling down to London in July. It is now heading over to Europe, to appear at major events in countries including Spain, Italy and Belgium. It will then return to tour the UK touching down at key festivals and events throughout the summer, before crossing the Atlantic to complete a US tour in the autumn, Hunter’s largest market.

The now iconic design was introduced by the brand in 1956. Hunter’s Original boot is globally the best-selling, most recognised Wellington boot. The 120-foot hot air balloon carries all the Original boot’s design details, including reference to the 28-part handcrafted construction of each pair.

Founded in Scotland in 1856, Hunter is a British heritage brand renowned for its Original boot, first introduced in 1956. The boot is displayed in the permanent collection of London’s Design Museum and will feature in the V&A Dundee, which opens in Scotland in September 2018. The brand has built on its heritage of over 160 years, creating best-selling new footwear, outerwear and accessories to protect from the weather and perform across all terrains.