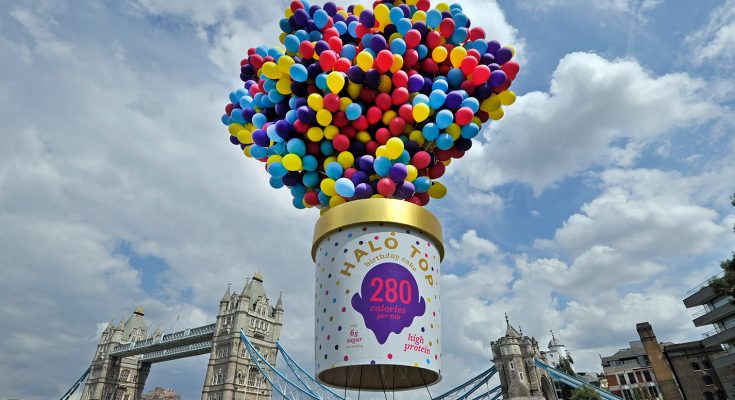 American ‘guilt-free’ ice cream brand, Halo Top, is expanding its UK range with the introduction of three new flavours: Birthday Cake, Red Velvet and Oatmeal Cookie. Now available for purchase nationwide, the new flavours were launched with a recent pop-up at London Potters Field in July. Thousands of free samples were given to the public underneath a giant 10-ft replica of Halo Top’s Birthday Cake ice cream tub, suspended in the air by 2,900 balloons.

The recent low-calorie ice cream trend has seen the brand become on of the hottest in the market since its US launch in 2011. Halo Top offer tubs at 280-360 calories which are high protein and promise to taste just as good as higher calorie alternatives. Former lawyer, Justin Woolverton, founded Halo Top while on a quest to create ice cream that could be enjoyed without guilt.

Seven flavours including Sea Salt Caramel, Peanut Butter Cup and Cinnamon Roll arrived in the UK in January to mark Halo Top’s debut. After a positive response, Halo Top are now expanding their range in response to their growing British fan base. Doug Bouton, COO & President noted, “The response from our UK fans has blown us away. The only reason that we’re able to launch more flavours so soon after our initial launch is because of our incredible U.K. fans, and we think giving them three more flavours to enjoy this summer is the perfect way to say thanks!”