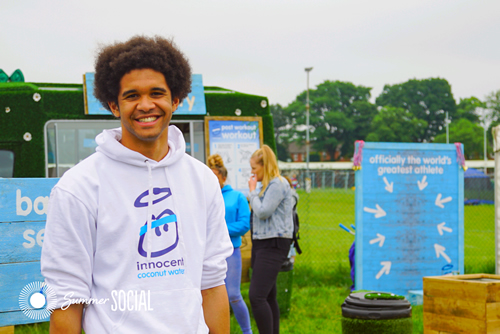 Drinks brand innocent is running a new ‘real world’ campaign for innocent Coconut Water, with the theme of changing how people see exercise and related habits like hydration and getting them to ‘exercise wild’.

By showing people all the ways that nature can serve the same purpose as an indoor gym, only better, the innocent Coconut Water Gym activation launched at the start of June 2016 at the Summer Social event in Richmond Park. The activation will run throughout the summer, finishing in September.

Part of innocent’s ‘ideas for natural living’ strategy, which began earlier this year with the Farmacy campaign, the innocent Coconut Water Gym activation tours the UK from June to September. Run by marketing agency Sense, it consists of a number of separate streams.

Athletes at fixed sporting events, such as the Wolf Run, Ironman, Total Warrior and Spartan Sprint, will be provided with a branded cool down and chill out area. Commuters and people leaving urban gyms will be inspired to ‘exercise wild’ by our ‘membership team’ and encouraged to join the innocent Coconut Water Gym – otherwise known as the great outdoors. Finally, those already ‘exercising wild’ in parks and outdoor spaces will be rewarded with free samples of ice cold Coconut Water.

Launched in 1999, innocent drinks manufactures a range of healthy, natural drinks including smoothies, coconut water, fruit juices and more. Its highly popular products and unique approach to marketing and social responsibility have turned it into an iconic brand. It is now more than 90% owned by Coca-Cola.