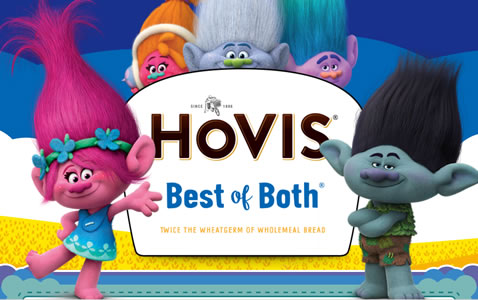 Hovis has linked up with Trolls, the latest film from DreamWorks Animation, for an on-pack promotion offering the chance to win a family holiday to Los Angeles, where they will also visit the DreamWorks and Fox studios.

The promotion is appearing on eight million loaves of Best of Both and is already in store. To participate, consumers have to buy a promotional pack, find the 10 digit alphanumeric code on it and then go to www.hovis.co.uk/trolls and enter the code and provide their personal details.

“Trolls is a perfect fit for Best of Both, with its family-friendly appeal,” said Hovis marketing director Sharon Barraclough. “We are confident the release of Trolls and the prize on offer will drive further demand and attract new shoppers.”

The prize includes a four day (three night) stay in Los Angeles in a four star hotel, return flights from London Heathrow, the Dreamworks and Fox studio tours, goody bags and travel insurance for a family of four.

The competition’s Terms & Conditions specify that to be eligible, a ‘family’ must include at least one adult aged over 21, one person aged over 13 and two children aged 12 or under. The T&Cs also include the warning that the actual dates of the prize trip may fall outside school holiday times.

The promotion kicked off on October 1st 2016 and closes on 31st January 2017. It is open to UK residents excluding those from Northern Ireland.

Trolls, which opens in the UK on October 21st, is a 3D computer animated film based on a range of toys originally created in the 1960s.

Hovis relaunched Best of Both in May 2016 with a new ‘softer’ recipe and packaging designs intended to appeal more to children.