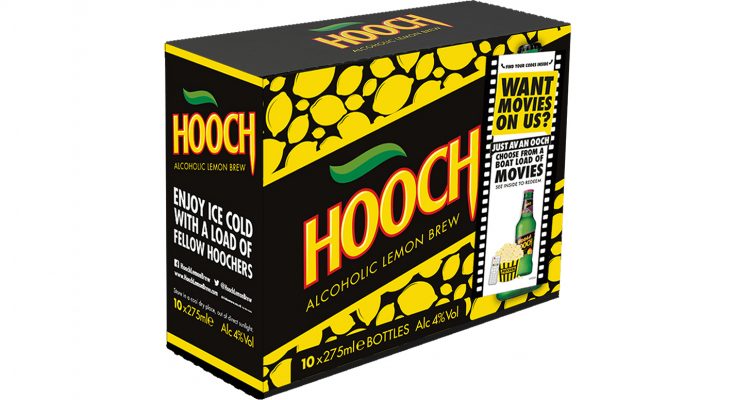 Flavoured Alcoholic Beverage brand Hooch is set to unveil its biggest ever promotion, which will see the brand giving away a movie with every purchase of a promotional bottle or pack. Consumers will have access to thousands of movies at the touch of a button, including many of the biggest cinema blockbusters.

Expected to hit 10m consumers and supporting its ‘Just Av An Ooch’ campaign, the limited-edition promotion will encourage drinkers to enjoy a Big Night In courtesy of the brand and is the result of extensive consumer research by Global Brands Ltd, who distribute and market the brand.

To redeem their free movie offer, consumers scratch off a panel on the Hooch pack to reveal a unique code which they then input at Hoochmovies.com. They will then be taken to a site operated by Global Brands’ partner, Rakuten, where they can browse thousands of movies and select the ones they want to watch. Each code is worth 350 Rakuten points, or £3.50 worth of downloads; multipacks carry two codes and individual bottles one.

Christian Sarginson, brand controller at Global Brands, says: “Continued research into our consumers’ habits and behaviours has been key in developing our latest campaign. Hooch has such a diverse drinker base that finding common interests can often be tricky, however this promotion enables us to reward all our key drinker types as well as recruit new consumers to the brand. With the World Cup over and Love Island coming to an end there is a gaping hole in prime-time TV, so we’re providing the perfect solution to fill it!”

Hooch conducted substantial market research earlier in the year to support their activity, building their plans around key understandings of their audience. The research revealed that video is a key element for their audience with up to 33 hours consumed per week and that 55% of them usually drink at home.

The brand will support the on-pack promotion with an engaging social media campaign and on-trade activity across the summer. The social media campaign will comprise of comical videos and parody clips from popular Hollywood movies which will be creatively executed by seven relevant, carefully selected social influencers, planned to be live on their social feeds throughout the rest of summer.

The promotion was created and managed in-house.

Originally launched – as alcoholic lemonade Hooper’s Hooch – by UK brewers Bass in the 1990s, Hooch was at one time the leading FAB or alcopop in the UK, with 70% of the market, and had massive international success. It was discontinued in 2003 but relaunched, with a lower alcohol formulation, in 2012 by Global Brands