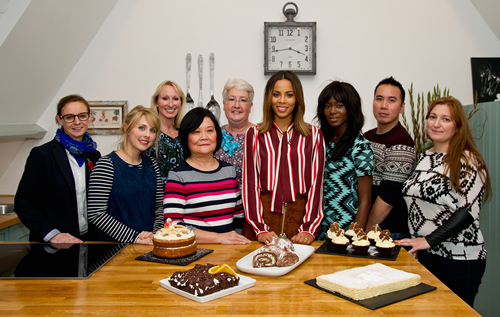 Procter & Gamble’s leading dishwash brand Fairy is partnering the Make-A-Wish Foundation for the 12th year running, and has teamed up with The Saturdays’ Rochelle Humes to raise funds through the charity’s annual Bake-A-Wish competition.

The fundraising campaign called for passionate bakers from across the country to submit the recipes for their favourite festive cake.  The entries were whittled down to five finalists. The winner was unveiled at Westfield on Saturday, with the winning recipe used to make cakes which were then sold at the bake sale, fronted by Humes, to shoppers in return for a £1 donation.

Fairy matched every plate washed over the weekend as a result of the bake sale with a £10 donation, and was aiming to serve 12,000 slices, with all the plates being washed with just one 780ml bottle of Fairy liquid.

The funds raised will go towards Make-a-Wish, the charity that grants magical wishes to enrich the lives of children and young people fighting life-threatening conditions.

Rochelle Humes says: “I’m so glad that I get to be involved in such a great charity initiative. Make-A-Wish UK do fantastic work.”

Emily Williams, Brand Manager for Fairy UK, adds: “We’ve been working with Make-A-Wish UK for 12 years now. The aim of the event in Westfield is to not only raise funds for Make-A-Wish UK but demonstrate the power of the bake sale and encourage people up and down the country to host their own Bake-A-Wish event.”

Fairy, P&G’s signpost brand, has just been announced as one of the 10 most trusted brands in a report published by the British Brands Group.