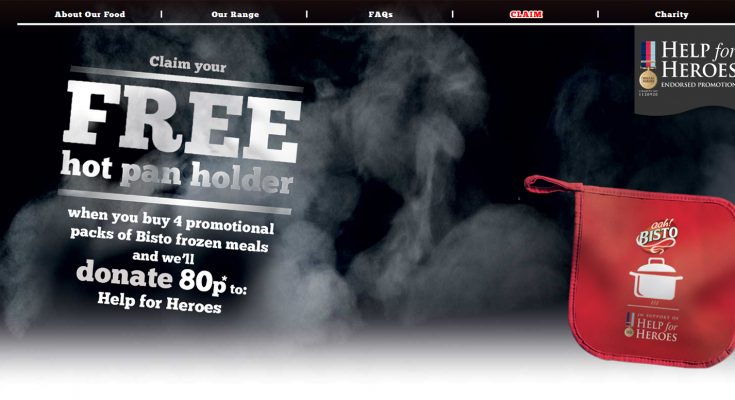 The Bisto frozen ready meals range has launched a new promotion which commits Kerry Foods, which makes the products under licence from Bisto brand owner Premier Foods, to donate a minimum of £25,000 to the UK charity for wounded, injured and sick Veterans and Serving armed forces personnel, Help for Heroes.

An on-pack offer running for 17 weeks until the end of July 2017 will offer consumers who buy four promotional frozen ready meal packs the chance to claim a free Bisto and Help for Heroes branded hot pan holder.

Each entry will see 80p donated to Help for Heroes, with a guaranteed minimum donation from Bisto totalling £25,000 for the charity.

The promotion is open to UK residents (excluding Northern Ireland). To claim a pan holder, consumers have to buy four promotional packs, go online to bistodinners.co.uk/claim/ and input the unique codes from the four packs. For every valid claim received, Kerry will donate 80p to Help for Heroes.

This is the second promotion that Bisto has run linking with Help for Heroes. In May 2016, the frozen ready meal brand launched its first ever on-pack promotion, giving consumers the chance to win £5; for every winner, Bisto pledged to give another £5 to Help for Heroes.

That promotion featured on 5 million Bisto frozen ready meals packs, with a potential contribution of £250,000 to Help for Heroes.

The partnership between Help for Heroes and Bisto was negotiated by London agency MINT which also developed the on-pack promotion and digital, advertising and media initiatives.

Claire Lynch, brand manager for Bisto frozen ready meals, comments about the new pot holder promotion: “It was clear from the thousands of entries in the first phase that Bisto’s core customer base is engaged with Help for Heroes and the essential services it provides to support our armed forces. As well as continuing to raise valuable funds for our partner charity, the campaign is designed to attract new consumers, drive sales among existing consumers and increase penetration by providing additional reasons to purchase.”