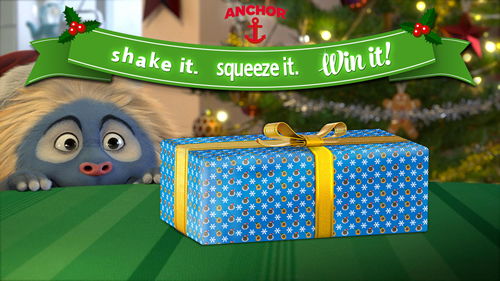 Anchor Spreadable is giving people the chance to see what’s under the Christmas tree early with its “Shake it, squeeze it, win it!” promotion.

The spread brand’s latest on-pack promotion, running from October to December, is based on the core insight that everyone is guilty of shaking and squeezing the presents under the tree before Christmas Day.

For the chance to win something, consumers enter a code from promotional packs of Anchor Spreadable and then get the chance to shake and squeeze a virtual present. If they guess right, then they win that present – which could be a prezzybox voucher, digital cameras, Christmas jumpers, socks or bikes for the family. Everyone who plays is also entered into a prize draw to win a family trip to Florida.

The promotion has been created for Anchor by integrated agency whynot! to encourage cost-conscious consumers to trade up and treat themselves this Christmas. It is part of Anchor’s new campaign for 2015 — ‘That’s the Good Stuff’ featuring the brand characters, the ‘Hugglers’.