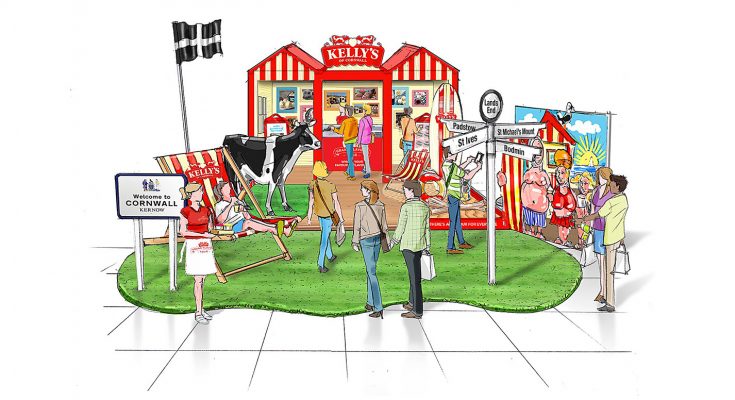 Cornwall will be coming to Observation Point on London’s South Bank on Monday 14th May to kick off a UK-wide roadshow for ice-cream company Kelly’s of Cornwall, offering consumers the chance to sample its range and enter a competition to win a Cornish beachside weekend break.

The Kelly’s of Cornwall Grand Flavour Tour was created to bring a taste of the Cornish Seaside to the rest of the UK, using distinctive Cornish icons.

The London debut will showcase the world’s first “Kelly’s of Cornwall Ice Cream Pasty”. TV chef and Kelly’s ‘ice cream sommelier’ James Strawbridge will be inviting passers-by to try innovative “Cone-ish pasties”, which are made of sweet-filled crumbly pastry.

This works like an ice cream cone and will be topped off with a choice of three Kelly’s ice cream desserts:

The unique Cone-ish pasties have been developed by James Strawbridge in association with Wild West PR.

The Kelly’s of Cornwall Grand Flavour Tour will then be travelling around the UK to share its uniquely Cornish Ice Cream at 36 supermarket locations over six weeks.  Visitors will be able to sample the Kelly’s take-home flavour range with a variety of toppings and will be invited to vote for their favourite flavour via digital touch screens on the stand, with a chance to win a beach-side “Flavour of Cornwall” weekend break.

The results of the vote will be shown every week on the Kelly’s Facebook page, along with upcoming roadshow locations, with the nation’s favourite flavour announced at the end of the tour.