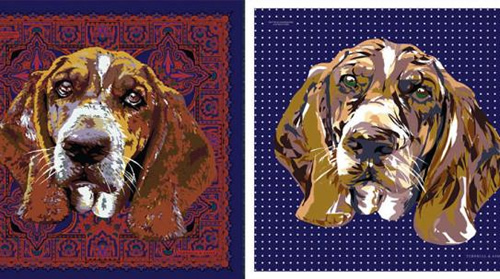 Customers can now order bespoke pocket squares (handkerchiefs) with the picture of their dog on. There are three bespoke styles to choose from: Doggy Warhol, Renaissance Dog and Polka Dog.

The bespoke pocket squares can be ordered instore at the brand’s three London outlets or its New York branch, or over the phone. Once ordered and paid for, customers send a digital image of their dog to T&A’s Man’s Best Friend team, who will process the order. The pocket squares are made from 100% silk and printed in Macclesfield, England.

Turnbull & Asser will be donating 10% of the profit from all UK sales to Dogs Trust, the UK’s biggest canine charity, founded in 1891 and formerly known as the National Canine Defence League.

The fashion house says the idea for the promotion came from a 1931 advertisement found in its archives which offered customers the chance to have their dogs pictures put on fabric.