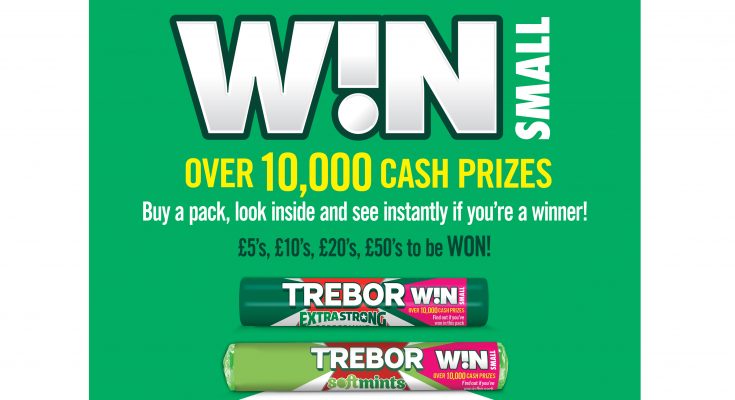 Trebor, the Mondelez-owned mint brand, is offering thousands of UK consumers the chance to win between £5 and £50 in its latest on-pack prize draw, Trebor Win Small.

Trebor Win Small aims to drive excitement and sales by offering a lot of smaller prizes rather than a single big prize. The mint brand says that while a small cash prize may not change someone’s life, it will put a smile on their face. There are 10,800 cash sums available to be won, and the total potential prize pot is £100,000.

Consumers win by unwrapping Trebor packs and finding a ‘YOU’VE WON’ message inside with a code. If they do, then they need to go online to the competition website and enter the code to find out what they have won and how to claim it. All claims must be made by 5.00pm on March 31st, 2019.

Trebor Win Small aims to follow the success of the brand’s Get Minted campaign, which returned for a second time earlier this year, and delivered a sales increase of 6.8% in Independents and Symbols during the promotional period, according to Mondelez, which owns Trebor.

Amy Lucas, Brand Manager for Trebor, says: “Trebor has a market share nearly double that of its nearest competitor, and currently holds the top three mint SKUs in the impulse category. Our latest competition aims to create excitement in store, that will encourage consumers to purchase Trebor to give themselves a chance to win small.”

The Get Minted prize draw, which was exclusive to the convenience channel, ran from April 1st until June 17th 2018 and offered consumers a chance to win prizes ranging from £50 up to a £5,000. At the same time, retailers who stocked Trebor and displayed the Get Minted POS won the value of any cash prizes claimed by consumers who bought winning packs in their store.

The Trebor brand is owned by Mondelēz International, the global snacking company with 2016 net revenues of approximately $26 billion. Mondelēz is a world leader in biscuits, chocolate, gum, candy and powdered beverages, with power brands including Oreo and belVita biscuits; Cadbury Dairy Milk and Milka chocolate; and Trident gum.