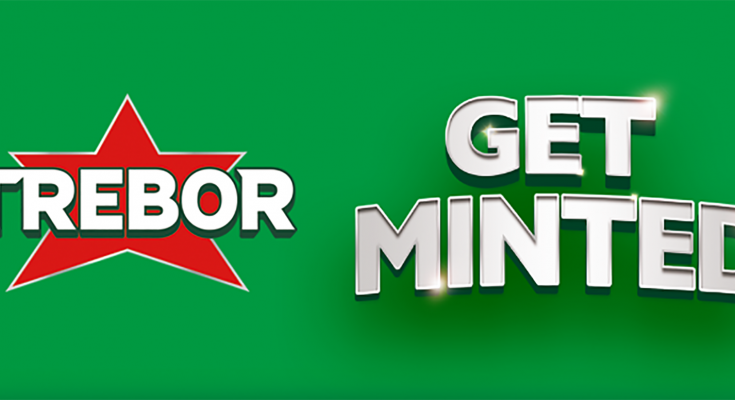 Mar 28, 2018, 20:11 pmComments Off on Trebor relaunches ‘Get Minted’ retailer and shopper promotion

Trebor is rerunning its Get Minted promotion for a second year. The convenience channel exclusive promotion will run from April 1st until June 17th 2018 with the aim of driving excitement and sales by offering consumers a chance to win one of 102 prizes, ranging from £50 up to a whopping £5,000.

Consumers can win by simply unwrapping Trebor packs and finding a ticket revealing if they’ve won a cash prize. For retailers who stock Trebor and display the Get Minted POS, Mondelēz International will match the value of each cash prize in stores where winning packs are purchased.

Get Minted was launched last year and succeeded in both exciting shoppers and driving sales with an increase of 8.5% in Independent and Symbol stores during the promotional period. This year’s promotion will be extended to include 2017’s new launches, Trebor Softmints Pots 100g and Trebor Sugar Free Mighties Megapack 44.5g.

Retailers will also be able to find advice on how to boost mints sales further on the Mondelez trade website, deliciousdisplay.co.uk.

Carly Sharpe, Brand Manager for Trebor, says: “Trebor is the UK’s number one mint brand and its single rollpacks sell faster than all other mints. Our latest competition will create excitement that will encourage consumers to purchase Trebor in store to give themselves, and the retailer, a chance to win big.”

The Trebor brand is owned by Mondelēz International, the global snacking company with 2016 net revenues of approximately $26 billion. Mondelēz is a world leader in biscuits, chocolate, gum, candy and powdered beverages, with power brands including Oreo and belVita biscuits; Cadbury Dairy Milk and Milka chocolate; and Trident gum.