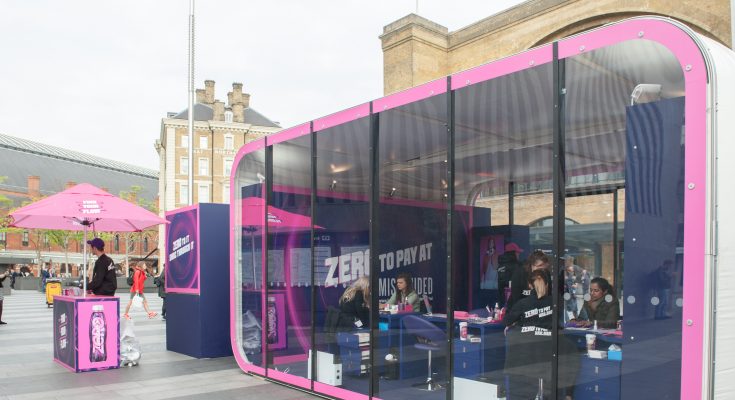 Travel hubs as platforms for brands to engage consumers

May 22, 2018experiential, News, Opinion, shopperComments Off on Travel hubs as platforms for brands to engage consumers

Travel hubs, like airports and train stations, offer a fantastic platform for a full spectrum of promotional activity ranging from sampling to immersive experiential activations. There has been an evolution in these venues recently to be more than just pure transport hubs, but rather retail destinations which has increased dwell times and customer engagement. The potential of these venues is relatively untapped but when used strategically can garner impressive results.

The opportunities in airports, for example, are broad and with the detailed demographics available, brands can be extremely targeted in their approach. Airports offer significant dwell time (2.5 hours with 70 to 80 minutes on average in the departures terminal[1]) which provides brands with a captive, relaxed and receptive audience, typically with a high socio-demographic profile.

If the passengers are going away on holiday, the excitement level is already high with the prospect of having a break and people are therefore more happy and eager to speak to retail staff and brand ambassadors, as they see it as part of the holiday experience. Being in a positive mood leads to impulse decisions and people are more open to discovering new brands they may not have otherwise considered.

Airports also offer the opportunity to target large groups of each sex going on holiday, such as stag and hen weekends.  These groups tend to be of a young, tech-savvy demographic with a high disposable income and little, if any, domestic responsibility. Likewise, a high proportion of professional couples seek refuge from their daily lives with city breaks and getaways in foreign lands. Other identified passenger groups include baby boomers who no longer have dependants and are enjoying rediscovering life with a higher disposable income and less responsibilities.

The above demographic profiles obviously focus on leisure travellers, but many airports also have an equally high proportion of people travelling for business purposes.

Airports offer unique opportunities for experiential activity as it is one of the only environments where you can be sure where consumers will be at any particular time, predict how long they will be there and where they will go next. It enables brands to be very specific in their targeting; from sampling festive related products to people going on holiday to Lapland, to giving them some home comforts on their return from a long-haul flight from Australia or creating an experiential activation for business passengers for a technology product.

Many air travellers over-index on buying core tech products, motors and media, and they tend to be early adopters of technology and are often influential within their network of friends and colleagues. Brands can therefore ensure the awareness of a specific product is raised within a specific geographical area, on a pre-defined route or time (e.g. first flights to all London airports in the morning).

Aside from airports, train stations have proven to be excellent locations for experiential and face-to-face marketing activity.

They have historically been used as sampling pods due to their high, consistent footfall; however, the recent trend has been to incorporate sample distribution with an experiential element to consolidate the brand messaging.

Lucozade Zero, for example, complemented a major sampling campaign last year targeting high footfall locations such as London King’s Cross Station by collaborating with fashion retailer Missguided and opening a ‘Zero to Pay’ nail bar, offering Lucozade Zero-inspired complimentary nail art (see picture). This not only increased brand awareness and trial with their target audience but also generated a social media buzz that would not have been possible with just pure sampling. Similarly, belVita installed a giant radio within a number of train stations at the end of 2017, offering commuters a live music performance and a sample of their recently launched soft filled belVita biscuits.

Train stations also offer a platform for PR launches and one-off events. Recently, a number of film PR stunts have taken place at central London train stations including an interactive mural for the film mother! and a shoe shining service for the latest Kingsman movie. Stations can also lend themselves well to specific seasonal or event activations, from Valentine’s Day promotions by tourist boards to a giant Thomas and Friend’s chocolate train over the Easter Weekend and a huge festive hamper activation by Waitrose looking to reach people travelling home for Christmas.

The latest technology is also being employed by many brands, with Augmented Reality being hugely popular, especially for products and services that are not necessarily that easy to get engage potential customers with.

Travel hubs have evolved from being places which people go to in order to to go somewhere else to become places where people want to spend time. The different mindsets of people, depending on their journey purpose, destination and travel means, enable brands to adopt a very targeted approach. All of these factors combined mean that although travel hubs were not necessarily considered for anything other than sampling stations previously, they are now increasingly popular for larger and more complex experiential campaigns today.

Andrew Bodwick is Head of Brand Experience at SpaceandPeople. The SpaceandPeople Group is a leading international destination media specialist, present in the UK, Germany and India, representing over 350 UK venues with a weekly footfall of over 45 million. The Group markets, sells and administers space in high footfall venues (including shopping centres, garden centres, retail parks and travel hubs), matching brands, promoters and retailers to the venues and footfalls that are right for them.